What are the priorities of the current administration during a period of the government being slightly closed? Clearly not honoring the aging heroes of WWII, who have been cruelly fenced out of Washington’s National Mall and their own war memorial. 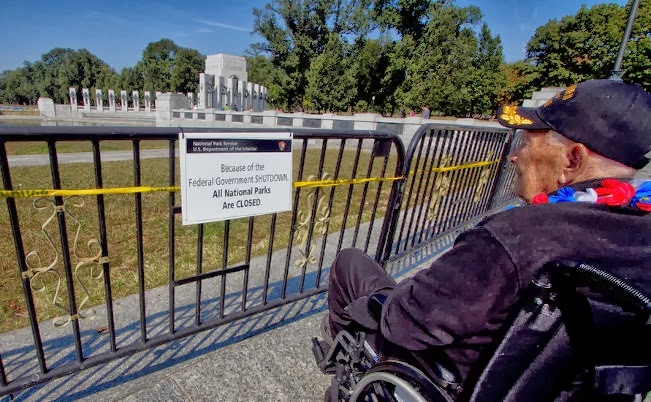 But foreigners who broke American laws to come and steal citizens’ jobs are quite welcome. The festivities included live music and speakers like Nancy Pelosi on a ginormous elaborate stage, shown below: 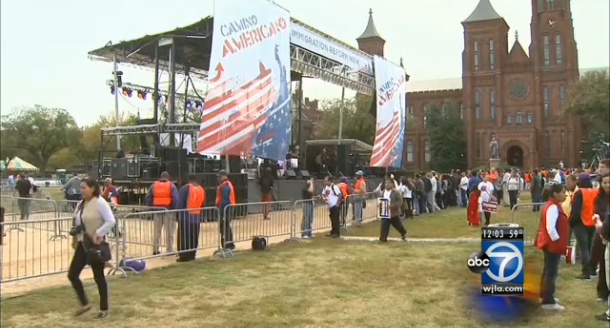 Even USA Today noticed the unfairness:

WASHINGTON — A week after World War II veterans struggled to gain access to a memorial on the National Mall due to the government’s partial shutdown, thousands of people pushing for a new immigration law have been cleared by the government to proceed with a concert and rally Tuesday on the Mall.

The march, dubbed the “Camino Americano”, or “American Road,” is hosted by groups including the Service Employees International Union and Casa de Maryland. The rally will feature speeches by House Minority Leader Nancy Pelosi, D-Calif., and other members of Congress. Another highlight will be a concert by the Mexican band Los Tigres del Norte.

The concert is the punctuation mark on a series of demonstrations that included more than 100 rallies around the country on Saturday to push Congress to adopt an immigration law that would allow the nation’s 12 million undocumented immigrants the ability to apply for U.S. citizenship.

After seeing a group of veterans forced to move aside barriers to access the World War II Memorial last week, some are upset over what they see as the Obama administration giving preferential treatment to a group pushing for one his biggest legislative priorities.

“It’s bad enough watching these marches when we watch illegal aliens breaking our laws. Now they’re being given free range on these public parks while we’ve seen the greatest generation military vets being turned away from their sacred memorials,” said Bob Dane, a spokesman for the Federation for American Immigration Reform, a group that opposes proposals in Congress to legalize the nation’s undocumented immigrants. “It’s offensive and it shows where their loyalties lie.”

Susana Flores of Casa de Maryland, a community organization that assists immigrants and helped organize Tuesday’s rally, said they were given clearance for the rally by the National Parks Service based on First Amendment grounds. National Parks Service spokesman Mike Litterst confirmed that the march will go on.

“Under the same First Amendment rights that are allowing Honor Flight veterans and their families to visit the veterans memorials on the National Mall, other groups will be granted access to the park for First Amendment activities in accordance with National Park Service established regulations,” Litterst said in a statement.