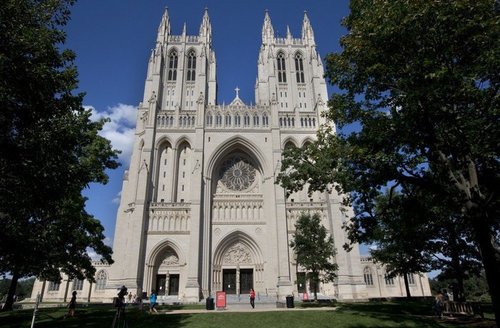 The collapse of the Episcopal Church continues this week with news that the National Cathedral in Washington, D.C., will permit Muslims to conduct an afternoon prayer service there.

According to The Washington Post, the head Muslim in charge, who is South Africa’s ambassador to the United States, explained why Christians must surrender their territory: “This needs to be a world in which all are free to believe and practice and in which we avoid bigotry, Islamaphobia, racism, anti-Semitism, and anti-Christianity and to embrace our humanity and to embrace faith.” .[In a first, Washington National Cathedral to host Friday Muslim prayer service, By Michelle Boorstein,  November 10, 2014]

Unsurprisingly, a top priestess (The Rev. Canon Gina Gilland Campbell) conjured up this stupid idea the evening before the service for communist Nelson Mandela.

The night before the Mandela service, she said, [she and the Muslim] stood in the cathedral’s soaring nave, looking down the long aisles. It was like being in a mosque, Rasool said. How so? she asked. In ancient mosques, he told her, long troughs of water in long aisles like the cathedral’s worked to carry the acoustics.

“I was struck by the idea that two people could be standing in the same place but see their own prayers,” she said.

Actually, some of us are struck that a presumably intelligent adult could utter such a leftist banality. Then again, she is a Methodist  priestess.