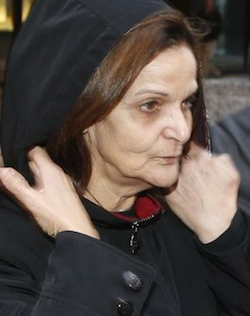 The recent guilty verdict in the trial of a convicted terrorist bomber for immigration fraud is another reminder of how inept the feds are at barring the entrance of dangerous people into America. Numerous war criminals have been admitted to this country because of plain sloppy investigation of immigrants backgrounds by an unconcerned bureaucracy.

The case is hardly a confidence builder for the idea that the government could responsibly handle an amnesty for millions of lawbreaking foreigners that would still protect public safety.

In addition, the Obama administration has ordered eased immigration standards so that Syrians with limited terror ties could be admitted. The White House must think America has insufficient jihadist diversity.

Anyway, todays criminal terrorist alien is Rasmieh Odeh (pictured), a Palestinian who was imprisoned in Israel for a bombing that killed two students in 1969. Israel released her from incarceration in a prisoner swap with the Popular Front for the Liberation of Palestine, not because she was thought to be rehabilitated. Odeh was convicted in Detroit for omitting her criminal terrorist record when she applied to enter the United States.

Despite the fact she was a known terrorist, Odeh got a job with the federal government that allowed her access to the personal information of Americans: Convicted Terrorist Bomber? No Problem Getting ObamaCare Navigator Job.

Greta van Susteren was outraged by the case and highlighted it on her Fox show in February:

Throughout the case, the pro-jihad Palestinians of Michigan showed up to protest her incarceration, making bogus excuses for her undeniable criminal act of not ticking the terrorist box on her application for immigration. The alleged victimhood of Odeh was played up in the news article by Niraj Warikoo:

A Detroit jury today found a Palestinian immigrant guilty of not disclosing that she had been convicted in a 1969 Israel bombing when she was applying for U.S. citizenship.

Rasmieh Odeh, 67, was accused by prosecutors of being a terrorist who killed Israelis in 1969 and then lied about it when trying to become a U.S. citizen. Odeh used to live in Michigan and is now in Chicago, where she works for the Arab American Action Network. She was not charged with any terrorism crime, but with immigration violations.

Odeh could face up to ten years in prison for her conviction and be stripped of her U.S. citizenship. After the verdict, Odeh said outside the courthouse: We have to bring the justice together..Im strong & I ask all of you to be strongWe are the strongest people, not the governmentWe are stronger.

In a statement, her supporters called todays verdict a travesty of justice, saying that Odeh did not get a full and fair trial.

The Rasmea Defense Committee claimed that the immigration charge was nothing but a pretext to attack this icon of the Palestine liberation movement.

They said Odehs attorneys will appeal the decision.

But a jury agreed today with federal prosecutors who said that Odeh checked no on immigration and citizenship forms she filled out in Detroit when asked whether she had ever been convicted of a crime. Odeh concedes that she was convicted in Israel, but maintains that she was forced to confess after being tortured. She also claims that she thought the questions on the forms referred only to convictions in the U.S.

The trial has drawn national attention, with up to 100 protesters rallying outside the courthouse every day last week and today. Rallies also have been held in Florida, Minnesota, Pennsylvania and Illinois. Odeh, associate director of the Arab American Action Network in Chicago, is being supported by a network of pro-Palestinian groups, which have launched online campaigns on Twitter and Facebook to bring attention to her cause. The group that she works for is part of the Dearborn-based National Network for Arab American Communities.

At the request of prosecutors, the jury was partially sequestered, a move only done in high-profile cases.

The case was contentious, with a previous judge, Paul Borman, recusing himself after Odehs attorney said Borman had a financial connection to the case because of pro-Israel donations; Borman said the 1969 bombing targets included a supermarket to which Bormans family was financially tied. After serving time in prison in Israel, Odeh was released in a prisoner exchange.

Odeh immigrated to the U.S. in 1995, coming to Michigan to help take care of her father, who had cancer. She also had a brother in Michigan who owned a restaurant. She became a U.S. citizen in 2004. On her immigration forms in 1995 and later on her application forms for citizenship, she said she was never convicted of a crime.

Prosecutors call her a terrorist who used deception to enter the U.S. They hoped that a guilty verdict will send a message that terrorists cant seek to hide in the U.S.

The United States will never be a safe haven for individuals seeking to distance themselves from their pasts, William Hayes, deputy special agent in charge at the U.S. Department of Homeland Security, said in a statement last year in October at the time of Odehs arrest.

An individual convicted of a terrorist bombing would not be admitted to the United States if that information was known at the time of arrival, Barbara McQuade, U.S. Attorney for the Eastern District of Michigan, said in the statement last year. Upon discovery that someone convicted of a terrorist attack is in the United States illegally, we will seek to use our criminal justice system to remove that individual.

Before the trial, defense attorneys for Odeh said in court filings that she had been sexually assaulted and tortured by Israelis while in prison, resulting in a forced confession. But Judge Drain did not allow those claims to be mentioned during the trial, disappointing her supporters, who were planning to make that a key part of their case.

A busload of protesters from Chicago drove to Detroit last week and for previous court hearings. Nadine Naber, associate professor at the University of Illinois, was in Detroit to support Odeh.

This was a politically motivated case, Naber said Friday. We werent allowed to talk about how she was sexually tortured.