N.Y. POST's Michael Goodwin Hits One Out Of The Park On Amnesty:"Obama To Working Americans: You’re Fired!" 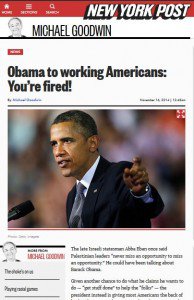 Michael Goodwin, a columnist at what Derb calls "America's Newspaper of Record," has attracted little attention at VDARE.com.  Apparently his name has come up here only three times over the years.

But in about a sixth of his November 16 column (Obama to working Americans: You’re fired!), he managed to intelligently sum-up one of the core aspects of America's immigration madness.  And, in a concluding paragraph to the immigration-focused part of the piece, he made a useful wave at other aspects of immigration's destructiveness.

Here are Goodwin's lead-in and then his 172 words on immigration:

Given another chance to do what he claims he wants to do — “get stuff done” to help the “folks” — the president instead is giving most Americans the back of his hand. His post-election agenda is the same agenda he had before the public told him No, Hell No.

His plans are worse than wrong. They are destructive to the people he says he wants to help.

His top three items are immigration, climate change and the minimum wage. Each will penalize people who work for a living.

On immigration, his plan to legalize up to 5 million aliens with the stroke of a pen is certain to invite more illegals to come to America and put a drag on working-class wages.

The Swiss-cheese border will see another surge if he rewards those who came here illegally. Worse, giving millions of immigrants the legal right to work puts them in direct competition with Americans working at factories, farms and low- and semi-skilled jobs everywhere.

With most incomes stagnant or falling for more than a decade, suddenly adding millions of legal new workers to the labor pool will put more pressure on more pay checks. Americans already having trouble making ends meet will be worse off thanks to the president.

Their kids will take a hit, too, and already there are reports of classroom squeezes to make room for thousands of young refugees, including on Long Island. State officials say some schools might cancel sports teams to pay for the high cost of these new students, few of whom speak English.

Contrast Goodwin's brisk, matter-of-fact treatment of what's at risk from the alien-in-chief's threatened mass amnesty with what we're routinely treated to by self-impressed solons, such as George Will, who will never deign to learn anything substantive about immigration:

Opposition to immigration because the economy supposedly cannot generate sufficient jobs is … defeatism. Zero-sum reasoning about a fixed quantity of American opportunity is for a United States in a defensive crouch, which is not for conservatives.