Its spring on the Mediterranean and that means thousands of Africans and Middle Easterners are boarding rickety boats to reach Europe, where they expect to be welcomed and treated generously. The Associated Press reported on April 14 that more than 7,000 migrants have been plucked from the Mediterranean in the last four days. Furthermore:

More than 280,000 people entered the European Union illegally last year. Many came from Syria, Eritrea and Somalia and made the perilous sea journey from conflict-torn Libya. 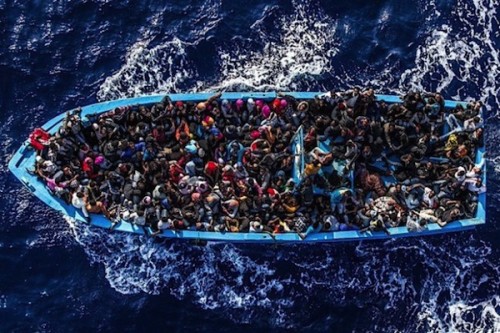 But even during the attempted escape to a better life, the common Muslim urge to murder infidels couldnt be suppressed, and allahs gangsters had to kill 15 non-Muslims because they were Christians.

Didnt the killers understand that they were headed for a continent of cultures based on Christian principles? How did they expect to get along? The killers are just an extreme example of the diverse barbarians headed north to overwhelm Europe. Africa is home to over a billion people why wouldnt a hundred million or more leave for the freebies of Europes social welfare societies?

By not blocking the thousands of boaters (as the Australians wisely do), Europe is training Africans to keep coming.

Italian police arrested 15 Muslim migrants who survivors said tossed 12 Christians from a boat during a recent Mediterranean crossing attempt. In a separate incident, 41 migrants were feared drowned as the situation in the region intensifies.

The Muslim migrants involved in the clash with Christians were arrested in the Sicilian city of Palmero and charged with multiple aggravated murder motivated by religious hate, police said in a statement Thursday, according to the BBC. The victims were from Nigeria and Ghana. The suspects were from Ivory Coast, Mali and Senegal.

Police learned of the incident through interviews with survivors, who said they boarded a rubber boat Tuesday off the Libyan coast with 105 passengers aboard, the Associated Press reported. The surviving Christians were able to remain onboard only by forming a human chain to resist the assault, police said.

Earlier Thursday, the International Organization of Migration said 41 migrants were feared dead after survivors were brought to a Sicilian port, Reuters reported. About 450 people may have died this week after 400 were presumed dead when another ship capsized off the Libya coast.

If this weeks figures are confirmed, the death toll for the year would rise to more than 900. Nearly 10,000 migrants — mostly from North African nations — have been rescued since Friday.

The uptick is increasing pressure on European nations to act. None of the 28 nations has pledged any resources to the efforts, AP reported.

We do not have a silver bullet, European Union migration spokeswoman Natasha Bertaud said Thursday, citing political and financial constraints. The European Commission alone cannot do it all.

Since the beginning of this year, about 31,500 people have made the crossing to Italy and Greece — the two largest countries receiving refugees, according to the United Nations High Commissioner for Refugees (UNHCR). As sea and weather conditions improve, the number of migrants attempting to make the journey has been picking up and is expected to climb further, the UNHCR said.

Last year, about 219,000 refugees and migrants — many fleeing conflicts in Africa,Syria and Iraq — crossed the Mediterranean. At least 3,500 died, the UNHCR reported. Exact death tolls are hard to determine because in many cases bodies are not found in the water and the death tolls are based off survivor accounts or reports by family members.

More migrants come through Italy than any other European country, in part because of its location. Lampedusa, a small Italian island, is closer to Tunisia than to Sicily.