Good news on the justice front. The Muslim terrorist immigrants, known initially as the "Fort Dix Six", have been found guilty of conspiring to mass murder American soldiers and could face life in prison. Sweet. In fact, the three Duka brothers were illegal aliens.

(Now they are five; the sixth man pleaded guilty earlier to a lesser charge of gun offenses.)

CAMDEN, N.J. (AP) – Five Muslim immigrants were convicted Monday of plotting to massacre U.S. soldiers at Fort Dix in a case the government said demonstrated its post-Sept. 11 determination to stop terrorist attacks in the planning stages.

The defendants were acquitted of attempted murder charges but face life in prison for conspiring to kill military personnel. The federal jury spent about 38 hours deliberating over the past six days.

The men lived in and around Philadelphia for years. The government said after their 2007 arrest that an attack had been imminent and that the case underscored the dangers of terrorist plots hatched on U.S. soil. [5 convicted of plotting to kill Fort Dix soldiers, Google-AP News, Dec 22, 2008]

As I have mentioned before, there have been numerous trials in America of terrorist immigrants, but the dinosaur media rarely covers them from a national security perspective. (See Muslim Terrorists In America Convicted — MSM Not Interested). 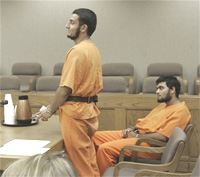 Mohamed admitted in a June plea agreement to creating a YouTube video showing how to turn a child's remote control toy into a detonator. He told authorities the video was to be used by martyrs fighting "invaders" of Arab countries, including the U.S. military.

For the first time on Thursday, prosecutors displayed the video in court. [Watch excerpts.]

"I admit that this video was something that wasn't a wise idea," Mohamed told the judge in a letter read by defense attorney Lyann Goudie. "I never intended to harm anyone in particular. I do apologize. ... I am no more than a college guy."

Right — he was willing to murder any infidel he could find!