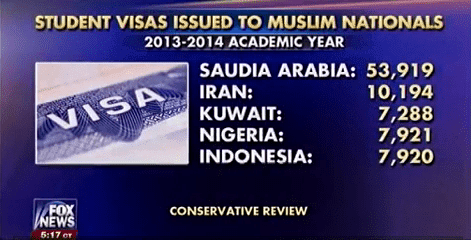 On a Fox News show Sunday morning, Tucker Carlson interviewed retired FBI agent Tim Clemente about the problem of large numbers of student visas being issued to residents of Islam nations. Clearly the subject was prompted by the recent report from the Conservative Review, linked below.

CARLSON: The ongoing threat seems even more imminent. Consider there are more than a hundred thousand muslim immigrants who come to America every year legally to study in colleges and many more who come through other avenues. So do we need to make changes to our national security and to immigration policy to keep us safe?

Joining us now retired FBI Special Agent, counterterrorism a tactical operations expert Tim Clemente. Thanks for joining us this morning.

Do law enforcement agencies see the massive increase in Islamic immigration to the US as a problem?

CLEMENTE: Well it’s a problem in that there are clearly individuals like Abdulazeez come from this pool. There’s no doubt that he was the perfect profile — his age, his education as far as being in the engineering sciences — that’s kind of typical, beginning as far back as the 9/11 hijackers and it’s something we’ve seen continuously, so clearly this is a pool of individuals that need to be looked at, need to be scrutinized when their applications for visas, either student or otherwise, are being considered, and the FBI has a daunting task as it is with individuals that are already here and we consider that hundreds of thousands more are coming this next year and beyond — it is, as Director Comey said, impossible to try and keep up with that influx.

The individuals alone that we already know may be involved with terrorist groups or may be leaning in that direction that need to be watched or put on watch lists is already something that overwhelms the manpower that the bureau has.

CARLSON: So is there any coordination between law enforcement and policymakers, so you know Congress lets in a certain number of immigrants from Muslim countries every year. Colleges lobby for more student visas because they want the money. The government of Saudi Arabia for example pays for all these Saudis to study in the United States. Does anybody ask, say, the Department of Homeland Security, what do you think it is?

CLEMENTE: I don’t believe there’s much coordination at all. The fact is that the freedoms we enjoy as Americans than those we extend to foreign visitors allow certain level of, let’s say, leniency on the part of the State Department and handing out those these applications, and you don’t need a national security clearance to come into the United States to study here from abroad, and so there’s no consideration of the national security threat, unless that individual is connected to someone directly or is themselves on some kind of watch list, there really isn’t a process in the middle there to see who they are and who they might be.

CARLSON: It’s interesting just to restate: there’s a lot of money at stake here, and colleges are making of a lot of money from this this influx of students, so last year just to put this on the screen, there are a hundred and twenty seven thousand visas issued to students from majority Muslim countries. That is a huge increase.

Is that primarily the threat? I’m looking at the screen here, 53,000 from Saudi Arabia, Iran 10,000, Kuwait 7,000, Nigeria which is about half Muslim seven almost 8,000, Indonesia 7900. Is this something that that law enforcement officials are concerned about?

CLEMENTE: [. . .] It’s a concern that is very hard to deal with when the restrictions on law enforcement are that you can’t just wantonly pick out people and try and I dig into their lives because you think they might be a potential suspect, there has to be more. The way our laws are written today there has to be a reasonable suspicion in order to move forward with an investigation and that has to be developed in a way that the United States Attorney General guidelines allow for the FBI or other intelligence agencies to continue scrutinizing these individuals, with a very high bar set.

The bodies keep piling up, but the subject of enemy immigrants is verboten except by the most fearless.

Admitting large numbers of potential unfriendlies inside the gates as immigrants has national security consequences. As I reported last year:

Student visas are the perfect scam for any youngish-looking person to enter the United States for whatever reason: simply enroll in some sort of educational institution from genuine accredited universities to low-rent visa mills, then never show up for classes and disappear into stupid-open America. The current estimate is that 6,000 foreigners considered concerning have taken advantage of this “system” among 58,000 visa overstayers this year overall.

Foreign students are compliant walking wallets in the mind of the educational industrial complex, currently adding $24 billion in easy money to the economy. As a result, education administrators insist on open borders for cash-carrying foreign students.

Shortly after the 9/11 attack on America, Senator Dianne Feinstein suggested a six-month moratorium on student visas but the college cabal came down on her like a ton of transcripts. She quickly relented as long as better security was promised.

In addition, several student visa holders have been convicted of jihad-connected crimes, so it’s not like the danger is imaginary:

? Uzbek citizen Ulugbek Kodirov was convicted of a plot to murder President Obama.

? Bangladeshi jihadist Quazi Mohammad Rezwanul Ahsan planned to blow up Manhattan’s Federal Reserve Bank, for which he was sentenced to 30 years in prison.

? Azamat Tazhayakov, the Kazakh friend of Dzhokhar Tsarnaev, was convicted in 2014 of obstruction of justice for hiding evidence of the Boston Marathon bombing.

? Faisal Shahzad arrived in America as a student, got an MBA and lived a quiet life in a nice suburb, earned by working as a financial analyst. Yet in 2010, he loaded up a van with explosives and tried to blow up Times Square in New York City, and was sentenced to life in the slammer for trying to reach his jihad goal. He even recorded a “Death to America” jihad video. Assimilation is often just skin deep among Allah’s helpers.

? Saudi national Khalid Aldawsari came to the United States as a student to study chemical engineering at Texas Tech; instead he dropped out and set about building a bomb, with one possible target being the Dallas home of former President Bush. That would have been some serious karma for Bush, since in 2005 he initiated the plot, er plan to welcome thousands of Saudi students to America with the help of the Saudi king who pays the expenses of many of the scholarships.

In 2005, only 2500 Saudi students attended college in the US, but since then the doors have opened wide for the nation that sent us 15 of the 19 9/11 hijackers. A Wall Street Journal article (3/15/15) put the total number of Saudi students at nearly 81,000, thereby endangering all Americans, from Presidents to women students.

Finally, here’s the scoop on the huge numbers of Muslim students flooding into America to enrich the universities and endanger the citizens:

How many more potential Islamic terrorists like Mohammad Youssef Adbulazeer are living freely in this country? And to what extent is our political class going to continue their suicidal policies?

Several months ago, we estimated that roughly 1.62 million individuals from predominantly Muslim countries have emigrated here since 9/11. We counted all of the green cards issued to foreign nationals of 43 countries with either near-100% Muslim population or an overwhelming majority of Muslims. While some of these individuals are likely non-Muslims, we noted that it is a pretty fair estimate of the number of Muslim immigrants and coincides with the Pew estimate of 100,000 million Muslim immigrants per year.

A quick search and tally of the data at the IIE for the same 43 predominantly Muslim countries reveals that 127,332 student visas were granted to students from these same countries. Our government does this every year and the trend is only growing. That means that 14% of the annual student visas are from Muslim countries, an even higher share than immigrant visas relative to the total immigrant population. 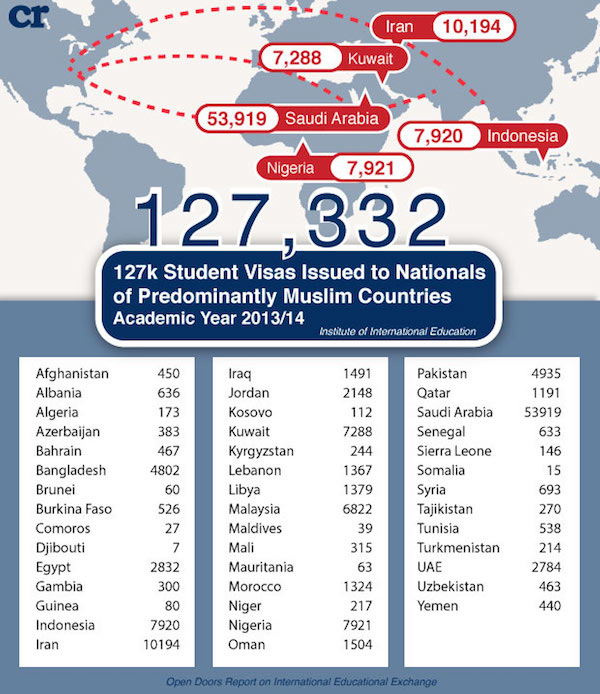 By far, the largest number of visas come from Saudi Arabia (remember 9/11?), topping out at 53,919 for the last academic year. As we noted last year, the Saudi government has unlimited funds to pay for their international students, and with no caps on F1 visas, they could theoretically send hundreds of thousands of students here every year.

Iran has sent us over 10,000 foreign students as well. What could go wrong?

Oh, and with Mohammad Youssef Adbulazeer on everyone’s mind, it’s important to note that we’ve admitted 7,288 foreign students from Kuwait for that same academic year.

No wonder Arabic is the fastest growing language on U.S. campuses.

Consider this thought for a moment: the college population is almost exclusively between the ages of 18-25. Given that 36% of American Muslims under the age of 45 believe that violence against America can be justified as part of Global Jihad, what percentage of foreign students during the prime age for Jihad coming straight from the Middle East harbor the same sentiments? In that sense, student visas from the Middle East and North Africa represent an even more direct security threat than immigrant visas.

The rapid increase in Muslim foreign students should also raise concerns in the context of the growing push to bring in more “high skilled” STEM students and workers. Liberals often blame Jihad on poverty and lack of a promising future for Muslim youth, but the reality is that many of these young Jihadis are smart and affluent with promising careers. Just look at the lifestyle of the Chattanooga Jihadi and the fact that he held a degree in electrical engineering.

A huge share of the international students from Muslim countries is enrolled in STEM fields, according to the data compiled by IIE. Seventy-nine percent of Iranian students and 42% of Saudi students were enrolled in STEM programs. So just remember when they discuss bringing in more STEM students and workers, there is a high likelihood we would be importing more security risks.

With this entire region embroiled in Islamic upheaval and the shocking success of the global cyber jihad in radicalizing Muslim youth, why in the world would we self-immolate and bring in so many potential security threats?