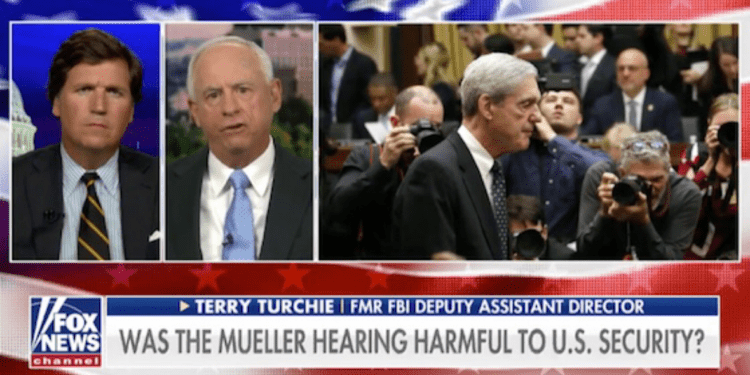 The Mueller hearing looked pretty uninteresting on TV, being powered as it was by Democrats’ insanely persistent pursuit of impeachment of the president, a project that began among the D-party before Donald Trump had even been inaugurated.

But there were other facts being revealed to experienced Washington veterans, and one appeared Thursday on Tucker Carlson Tonight: Former FBI Deputy Assistant Director of Counterterrorism Terry Turchie brought his national security expertise to analyze the proceedings. 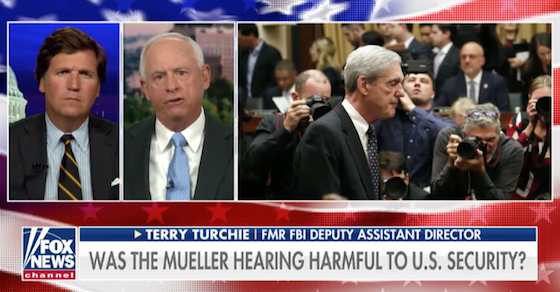 One big headline: While the major accusation against Trump for years has been that he colluded with the Russians, Turchie observed, “And if there’s anything that was in the purview of Director Mueller, it was to look at Russian influence in the 2016 elections. And in fact, he didn’t do that.”

Turchie didn’t mention the previous president by name, but noted, “The FBI has been compromised . . . by the Democratic Party.”

It’s discouraging to see America’s premier law enforcement agency so corrupted, but that’s what the Deep State does — bend government institutions to the will of the elites.

TUCKER CARLSON: Well, more than 200 times yesterday, former Special Counsel Robert Mueller deflected or declined to answer a direct question while testifying before Congress. Anyone watching at home learned very little about Russia, but it was not a total loss. Viewers learned how to use the word “purview” from the sheer number of times Mueller said a topic wasn’t in his:

MUELLER: It’s outside my purview.

It’s outside my purview.

With regard to Steele, that’s beyond my purview.

As I said before, I will say again, it’s not my purview.

CARLSON: So, Mueller’s testimony in the end was weird, sad and embarrassing. But was it more than that? Could it have been harmful to the national security of this country? Terry Turchie suggests it might have been. Turchie is a former FBI Deputy Assistant Director of Counterterrorism, and he joins us tonight. Terry, thanks a lot for coming on.

CARLSON: You’re suggesting that this might actually have hurt the country. How?

TURCHIE: Well, absolutely, I think in fact, I’ve talked to a number of former agents today, and yesterday after the hearings, and I think we’re pretty sure and feel pretty confident that we should be saying right now that we’re probably going through one of the most dangerous times in our country’s history, because we feel that what came out of this and what came out of those hearings, definitely confirmed our worst fears from two years ago.

And that is, from all the pieces that came out and all the pieces that we’ve collected, we feel like the Democratic Party is the hostile intelligence service here, if you will, that targeted the President and wants to get him removed from office. And if there’s anything that was in the purview of Director Mueller, it was to look at Russian influence in the 2016 elections. And in fact, he didn’t do that.

I mean, what he did is, he took facts from everywhere and that entire report is trying to pin those facts around the idea that the theory that Donald Trump was in bed with the Russians; that is not the way you do an investigation.

The FBI has been compromised and the facts are very clear. We don’t know today if it’s still compromised by the Democratic Party, and too many questions remain unanswered. We don’t have time to go into all of them.

But let me just give you one little piece of something that we look at when we do counterintelligence investigations like this. You always look at and you ask, who initiated the meeting? In any kind of thing — who initiated this meeting? With say the target. And so let’s take Trump Tower. They all are raving about that terrible meeting at Trump Tower.

That meeting was initiated by Natalia Veselnitskaya. She is the one who called Donald Trump, Jr., not the other way around.

TURCHIE: Before she did that, what did she do? She met with Fusion GPS that Bob Mueller has no idea who they are. I mean, I was crushed when I saw that. What did Glenn Simpson, the President of Fusion GPS, who had he met with before all of this? He’d met with Perkins Coie, the law firm that was representing the DNC and paying for and filtering money to Christopher Steele to write the dossier.

The same law firm, by the way, that would not allow the FBI to get into the DNC network, when we had the e-mails all hacked. This is awful. This is this is very obvious. And I think you’d be hard pressed to find an experienced FBI counterintelligence agent who really knows what they’re talking about.

I worked Russian counterintelligence for 20 years. So did many of the people I talked to. This is not about Donald Trump. This is about the Democratic Party weaponizing Intelligence agencies to convince the nation. They’ve known for decades as to how those people work, and in this instance, turning it against the President to get him removed from office. That’s what the resistance does. We are now going through the revolution that we started in 1960.

CARLSON: Terry Turchie, thank you for that.