MS-13 Victim Parents Are Trump’s Guests at State of the Union Speech, As Earlier Supporters Reject His Amnesty

President Trump’s earlier supporters among illegal alien crime victims won’t be present for his major address because most if not all are deeply disappointed in his political flipflop in giving unlawful foreigners amnesty and eventual citizenship. As a result, there will be a new cast of characters in the crime victim category, those who lost loved ones at the hands of brutal MS-13 gangsters.

Some of those early supporters spoke at the podium of the Republican nominating convention and appeared during the campaign.

Below, illegal alien crime victim families appeared with candidate Trump in 2016, including Jamiel Shaw Sr. at the podium and Sabine Durden standing next to Trump. 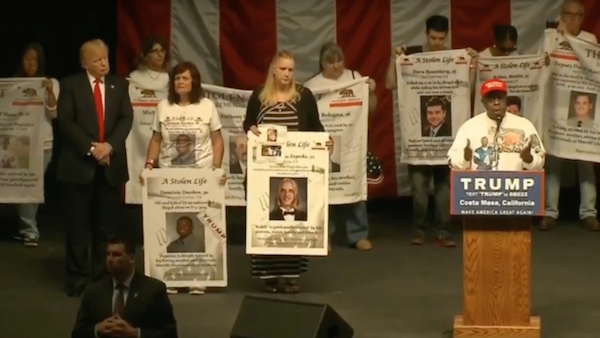 Now, those original crime victim families are hurt and appalled at the president’s U-turn to amnesty for so-called Dreamers:

They hugged him, they endorsed him, they appeared on stage after stage in the campaign with him — and now the victims of immigrant crime say President Trump delivered a “slap in the face” after he embraced a pathway to citizenship for illegal immigrant Dreamers.

Laura Wilkerson, the mother of brutally murdered Josh, appeared on a Fox News show last week and said, “We don’t owe them anything,” and observed that the DACA amnesty sets a terrible precedent for the crimes of the parents to be rewarded with citizenship for the offspring.

Jamiel Shaw Sr., whose son was murdered by an illegal alien gangster just feet from the safety of the family home, recently tweeted that DACAs are owed deportations, period.

Sabine Durden gave a passionate speech about the loss of her beloved son Dominic at the National Republican Convention where Donald Trump was nominated to be president. Now she is deeply disappointed by the betrayal from the man she once called her “hero.”

Only child, my son Dominic had HUGE DREAMS. He didn’t get to fulfill them, because he was killed by an illegal 7-12-12. Democrats don’t care because he can’t vote for them. #NoAmnesty #NoDaca #BuildTheWall Wake up and protect your Dreamers ! pic.twitter.com/V7PrslC3EL

So President Trump’s illegal alien amnesty scheme has destroyed the trust of some of his most loyal supporters. They have been thrown under the bus and are being replaced at the big speech by some new faces of illegal alien crime. It’s regrettable that the public will learn the horror of MS-13 savagery only after the bad faith shown toward the president’s early defenders.

In fact, the MS-13 gangsters are some of the most brutal monsters on the planet, yet were knowingly admitted during Obama’s illegal alien border surge and have come to terrorize parts of Long Island and Maryland.

The crime victim parents being highlighted in the State of the Union lost their high school daughters to MS-13 gangsters.

Martha McCallum of Fox News interviewed the parents of Kayla Cuevas after the president’s Long Island speech on July 28, 2017 to talk about the murder of their daughter by MS-13 gangsters. Kayla and her friend were brutally beaten and slashed to death after Kayla got into a disagreement on social media with some gangsters who attended high school with them. (How screwed up is it when MS-13 killers attend high school with our citizen kids?!) 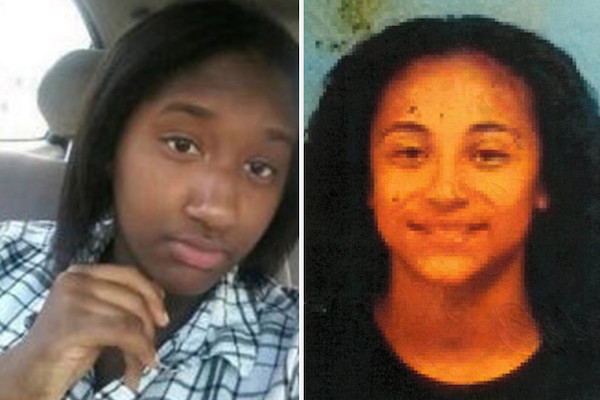 It’s reported the parents of both girls will attend the speech.

(CNSNews.com) – The White House on Monday released the details of those who will be guests of President Donald Trump at his first State of the Union address on Tuesday.Among those who will be seated in first lady Melania Trump’s box are Elizabeth Alvarado, Robert Mickens, Evelyn Rodriguez, and Freddy Cuevas, parents of two girls murdered by MS-13 gang members.

In March 2017, police arrested more than a dozen MS-13 gang members for the murders of 15-year-old Nisa Mickens and 16-year-old Kayla Cuevas in Long Island, N.Y. Their bodies were found in September 2016. Both had been brutally beaten.

Authorities say Cuevas had been “marked for death” because of a feud with gang members on social media, and Mickens had just been “in the wrong place at the wrong time.”