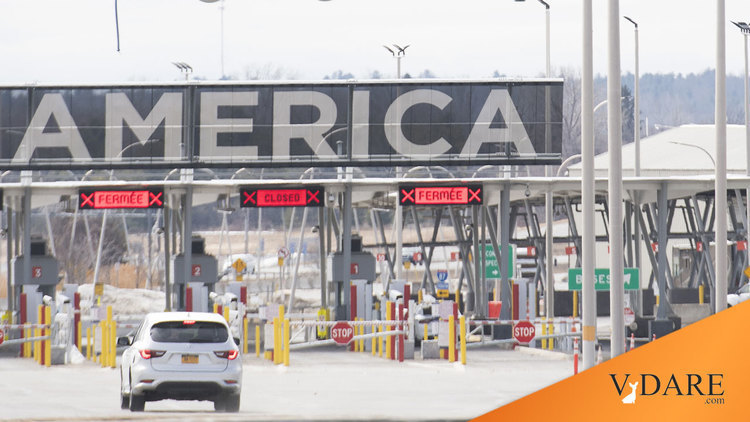 Since Steve Sailer mentioned Moynihan's Law of the Canadian Border, it occurred to me that our readers might not be familiar with it. George Will  described  it as Moynihan's discovery that  "a crucial determinant of the quality of American schools is proximity to the Canadian border. The barb in his jest was this: High cognitive outputs correlate not with high per-pupil expenditures but with a high percentage of two-parent families. "

"A few months before Barton's study appeared, I published an article showing that the correlation between eighth-grade math scores and distance of state capitals from the Canadian border was .522, a respectable showing.

By contrast, the correlation with per pupil expenditure was a derisory .203. I offered the policy proposal that states wishing to improve their schools should move closer to Canada. This would be difficult, of course, but so would it be to change the parent-pupil ratio.

Indeed, the 1990 Census found that for the District of Columbia, apart from Ward 3 west of Rock Creek Park, the percentage of children living in single-parent families in the seven remaining wards ranged from a low of 63.6 percent to a high of 75.7. This being a one-time measurement, over time the proportions become asymptotic.

And this in the nation's capital. No demand for change comes from that community—or as near to no demand as makes no matter. For there is good money to be made out of bad schools.

This is a statement that will no doubt please many a hard heart, and displease many genuinely concerned to bring about change. To the latter, a group in which I would like to include myself, I would only say that we are obliged to ask why things do not change."["Defining Deviancy Down", by Daniel Patrick Moynihan,  American Scholar, (Winter 1993)] ]