Morocco: Sharia Rejection of Adoption Condemns Many Orphans to Institutions 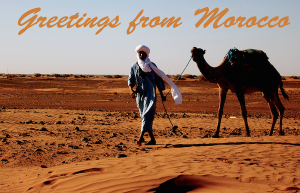 An interesting item from PBS Newshour described an aspect of Islam’s inherent cruelty as reflected in the sharia version of adoption, if it can be called that. When a western couple adopts, the commitment is total just as if the child were the natural offspring. But what’s called adoption in Islam — “kafala” — actually resembles a foster family arrangement. The child retains the biological family name and is never seen as a full part of the new family.

In short, Islam does not permit adoption as understood in the West.

The most important thing is that the child remain Muslim. Sharia values dictate that abandoned children must remain in dreary Islamic orphanages rather than be given to non-Muslim families ready to welcome and love the boy or girl. The only way a non-Muslim couple can enter into a kafala relationship is to convert to Islam. Nice religion.

The Newshour reported on how adoption in Morocco has reverted to kafala under the Islamist government as of 2012. That change has condemned many orphans to an institutionalized childhood since 24 children are abandoned in the country each day. Being born Muslim is hard to escape, by design.

The cruelty of Islam toward innocent children vis-a-vis adoption should be another reminder that our cultures are not compatible and Muslim immigration should end immediately.

In Morocco, strict adoption rules leave many orphans without hope, PBS Newshour, May 27, 2015

Orphanages in Morocco face a unique challenge in trying to find permanent homes for children in their care. A recent law has made it nearly impossible for many would-be parents, especially under the Islamist government. Special correspondent Kira Kay reports as part of a partnership with the Bureau for International Reporting.

GWEN IFILL: We turn now to Morocco and a story about a government ruling that has left many children without families.

Special correspondent Kira Kay reports. Her story is produced in partnership with the Bureau for International Reporting.

KIRA KAY: It’s noon on a school day in Fes, Morocco and these children are home for lunch. They’re a rowdy bunch, 138 in all, ranging in age from 5 to 15. Later in the day, they will do their homework, play some ball, clean their rooms, normal routine in most households, but these are orphans, some of the estimated 24 children abandoned every day in Morocco.

Nadia Bennis is this orphanage’s director.

NADIA BENNIS, Director, Association Dar al Atfal Al Wafae (through interpreter): Moroccan society doesn’t accept unwed mothers, so many prefer to get rid of the child at birth. For the children we find who are older than age 2, we believe their mothers tried to keep their babies with them, but because they are rejected by their families and are unable to find a job, they decided to abandon the child.

KIRA KAY: The children here are clearly well cared for. They have tutors to help them with homework and several nurses who run daily life, almost as a mother would.

But Bennis says concerns beneath the surface need tending.

NADIA BENNIS (through interpreter): We try with the psychologists to handle certain problems. A lot of work is required to convince the child that he’s not worthless, that there are people who love him.

Also, speech therapy — in an institution, the children have fewer chances to express themselves, so their language skills are poor.

KIRA KAY: The long-term goal of this orphanage is to find these children permanent homes. But that’s not so simple here in Morocco. Morocco, as a Muslim country, doesn’t permit traditional adoption. Instead, there is an alternative system called kafala, translated as custody or guardianship, that can last until the child turns 18.

ASMAA BENSLIMANE, Director, Association Bébés Du Maroc (through interpreter): Kafala is just the caretaking of a child by adoptive parents.

ASMAA BENSLIMANE: (through interpreter): In adoption, they become like a biological child. That’s to say an actual child of the family, with rights of name, and rights of inheritance, everything.

Why does Islam forbid adoption? To avoid the mixing of genes, for example, a brother marrying his sister without knowing it.

KIRA KAY: A key requirement of kafala is that children’s original identity be maintained, including their religion.

ASMAA BENSLIMANE (through interpreter): In kafala, it is required that the adoptive parents must be Muslim. That’s the main point. And in fact they must assure that when he grows he keeps his religion and his culture.

KIRA KAY: Morocco was one of only a few Muslim countries that allowed foreigners to come and undertake kafala; 50 percent of kafalas done in Morocco before 2012 were international. Families that were not already Muslim converted. A judge determined whether or not they had truly embraced Islam.

KHADIJA BOUEBAIDI, President, La Crèche de Tanger (through interpreter): This is Khalil. This is Amran. Their parents abandoned them at the hospital. The judge called us to take them.

KIRA KAY: Khadija Bouebaidi runs an orphanage in Tangier, where she introduced us to her young charges, 12, 13, even only 8 days old. Bouebaidi used to host families from Europe and the United States for kafalas, the families staying a couple of weeks at a time.

But in September 2012, a recently elected Islamist government issued a stunning announcement, known as the circular. It required Moroccan prosecutors to investigate the backgrounds of kafala applicants, and to deny kafala to all foreigners who were not regular residents of Morocco, to stop suspected conversions to Christianity once children left the country.

ASMAA BENSLIMANE (through interpreter): When the circular came out, we attempted to understand why. And we went with other associations to see the minister. He explained to us that he received letters which said that children of Morocco, when they were taken into foreign kafala, they were abused, they had their religion and identity changed. Voila. That was it.

KHADIJA BOUEBAIDI (through interpreter): We had children that foreign families wanted. Then the circular was issued and their kafala was stopped. It was a shock for our institution, but, of course, also a shock for the families. They would sit and cry and say, why won’t they give them to us?

KIRA KAY: Moroccan television chronicled the struggle of these foreign parents who found themselves caught in Morocco, their soon-to-be children still in orphanages, unable to leave; the parents forced to rent apartments nearby, unsure how long they’d be staying.

NADIA MOUHIR, Attorney (through interpreter): They were blocked. There were dozens of families in Rabat, Agadir, Marrakesh, Casablanca. The prosecutors refused to give their approval. The judges couldn’t grant the kafala after the circular.

KIRA KAY: With orphanages overflowing, Mouhir and her fellow advocates fought the circular. It took more than a year, but most families left Morocco with their children by the end of 2013. Courts have since declared the circular contradicts national law. But the damage has been done, says Mouhir.

NADIA MOUHIR (through interpreter): People are afraid to start a kafala, afraid of judges who would still apply the circular. In Rabat, we have only three or four families, when we used to have 30 or 40 during the same period. Even worse, foreign authorities no longer want to grant permission for them to come to Morocco.

KIRA KAY: Several American adoption agencies confirmed to “PBS NewsHour” they no longer risk doing kafalas in Morocco. The Ministry Of justice didn’t accept our requests for an interview.

NADIA BENNIS (through interpreter): It was a feeling of indignation, because we know what daily life is for these children.

KIRA KAY: Orphanage director Nadia Bennis has seen nearly all international kafalas vanish. And she says some children have now likely aged out, the bad luck of being born during the period of the circular.

NADIA BENNIS (through interpreter): We know that at birth and even during their first year, a child has a much greater chance of leaving through kafala than a child who is older than 3. Each day that a child stays in an institution lessens their chances for kafala.

KIRA KAY: Lawyer Nadia Mouhir is working hard to get Moroccans themselves to undertake kafala, like Nezha Bicherate, who is in the process of bring 6-month-old Ismael into her home. But the numbers of Moroccan kafalas, while growing, are still not enough. And stigmas remain, particularly about special needs children, another casualty of the circular, since foreigners had been more willing and able to take on the additional care.

WOMAN (through interpreter): This is new for me. I haven’t dealt with so many handicapped children before. I’m not sure what to do.

KHADIJA BOUEBAIDI (through interpreter): Islam is not about intervening in the beliefs of these people that are raising children. On the contrary, we need to see what the interest of the children is. And that interest is for them to have families to give them love, to give them culture and to let them be something in society.

KIRA KAY: One Moroccan orphanage is navigating the new landscape for foreign kafalas. Its influential director, Rita Zniber, insists parents provide follow-up reports on their children’s cultural and religious upbringing. And she ensures the dossiers she delivers to the judges are what they are looking for, which means no recent converts.

RITA ZNIBER, President, Fondation Rita Zniber (through interpreter): We have preferred to focus on parents whose family background is Muslim, or in which one of the two parents is Muslim, in a way that doesn’t provoke the sensitivities of ill-intentioned people who might, in today’s context, block the international kafala. This is done with their interests in mind, so they are not given false hope.

KIRA KAY: All these orphanage directors say they are eager to work with the government to develop a formal process to undertake the kind of follow-up Zniber has implemented on her own and jump-start foreign kafalas again nationwide. But, so far, no efforts to create such a system have materialized.?This is Kira Kay for PBS NewsHour in Meknes, Morocco.