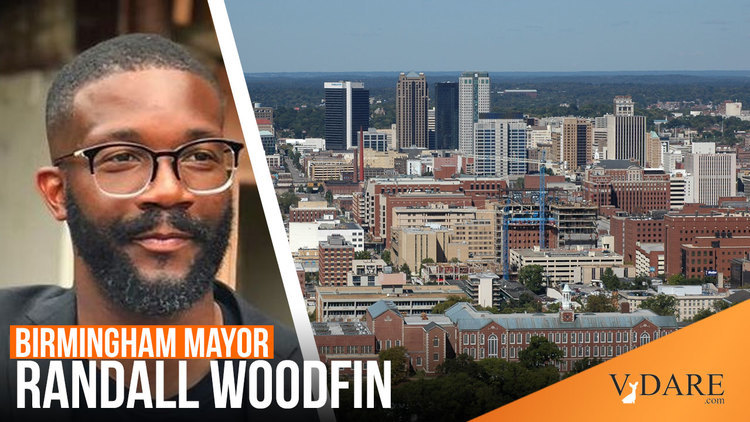 Earlier: Thousands of Blacks Line Up for Section 8 Vouchers in Portsmouth, Va: Event Canceled Because of the Fear of a Riot

Read this story and pretend America has a future.

More than 8,000 single mothers completed applications for Birmingham’s test pilot program that will offer free monthly income for a year.

“Response to the opportunity to participate in the Embrace Mothers program was overwhelming,” Birmingham Mayor Randall Woodfin [Right] wrote in an update on the program.

More than 19,000 women at least started an application during the one-week application period that ended Feb. 7, a figure equivalent to nearly 100 percent of the city’s total population of single female heads of household.

The Embrace Mothers pilot program will provide 110 single female heads of families a guaranteed income of $375 per month for a 12-month period.

Single women head 56.8 percent of all Birmingham households with children. In the City of Birmingham, there are 34,407 families that include at least one child under 18 years of age; of those, 19,554 are headed by single women.

“The COVID-19 pandemic has exposed the economic fragility of most American households, with disproportionate impacts on Black and brown people — most particularly women,” Woodfin wrote. “Addressing these and other issues that have contributed to the persistence of racial, gender, and income inequalities is a top priority of my administration.

The funding comes from foundation grants, not city funds.

Embrace Mothers is a partnership with Mayors for a Guaranteed Income, a national network of mayors advocating to provide Americans with an income floor. The program awarded Birmingham a $500,000 grant for the pilot program, part of a nationwide research project to evaluate the impacts of guaranteed income on individuals and families.

“Put simply, women — most specifically, mothers — are the bedrock of Birmingham, the nucleus of our families and our community,” Woodfin wrote. “By putting financial resources directly into the hands of single mothers, we enhance their economic stability, giving them the opportunity for improved outcomes for themselves, their families, and the city at large.”

In addition to the 110 participants in the pilot program, Abt Associates will select another 132 women to participate in a control group that will not receive monthly guaranteed income payments, but will complete surveys conducted throughout the pilot to evaluate its impact. Control group members will be compensated for their participation with a $30 gift card for each survey they complete. Pilot participants receiving payments will also complete the surveys and receive gift cards.

Woodfin said the volume of response was encouraging. “It demonstrates the strong desire of Birmingham’s single mothers to do all they can to support their families and seek out opportunities for greater economic stability,” he wrote.

It also showed the critical need for support for single mothers, he said.

Birmingham, Alabama is a 70 percent black city. More than 19,000 single mothers (almost all black) started an application for a pilot program only 110 individuals will qualify for in 2022.

Imagine if this had been something that was done in person, instead of over the Internet. Recall, only 8,000 of the more than 19,000 individuals who started the applications filled it out correctly.

We had an astounding response to the application process for our Embrace Mothers guaranteed income pilot program w/ @mayorsforagi.

Only 110 will be selected when all is said and done.

Did American Exceptionalism ever exist? Maybe.

But in a city where few Americans can be found, we see the civilization Americans once created is nowhere to be found.