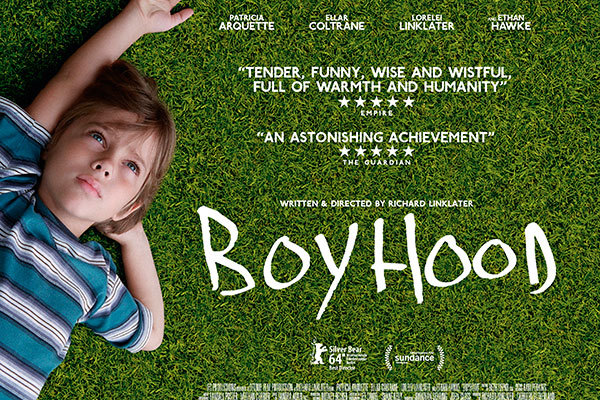 Oscar contender “Boyhood” is Richard Linklater’s somewhat overpraised autobiographical movie about his youth in Texas is the 1960s-70s as filmed through the gimmick of following a boy actor growing up from about 2000-2012.

‘Boyhood’ and the White Savior

Does “Boyhood’s” near-total absence of Latino characters make it racist?

Although the praise for Richard Linklater's "Boyhood" has been about as unanimous as praise can get, there's been a small but persistent objection, mainly lodged by critics of color, that the film's focus on a white middle-class male and the claim to universality implied by its title effect a kind of erasure. "Depicting a white American male from childhood to adolescence," Armond White wrote, "it celebrates the emblematic figure of American social power.  If Mason's boyhood is "Boyhood," what about the boyhoods of those whose lives are radically different from his own? What about "Girlhood"? Wouldn't the movie have been more interesting if were about Mason's sister (Lorelei Linklater) or his mom (Patricia Arquette)?

Not if Richard Linklater had made it.

Truth be told, Linklater might have better off sticking with his working title, “12 Years” (although half-stealing it from a movie about slaves would not have have helped his case)….

But in order to suggest life continues outside the frame, we first have to see a hint of that life inside it, and for Grisel Y. Acosta at Latino Rebels, "Boyhood’s” near total lack of Latino characters amounts to a kind of subtle racism:

When we see “The Birth of a Nation,” after returning from the bathroom because of becoming sick to our stomachs, we know without a doubt what the problem is and we can easily criticize the film —despite its merits in editing— for its horrendous content.

The sole exception to that absence — at least according to Acosta; I haven’t had an opportunity to rewatch the entire film to scan for Latino characters on the periphery — is Enrique, the yard worker played by Roland Ruiz, the one who picks up on an offhand suggestion by Arquette’s character and turns up years later as a college graduate and restaurant manager. For Acosta, this constitutes an iteration of “the horrific ‘save me White person’ trope that has been depicted in countless films, from ‘Dangerous Minds’ to ‘The Blind Side.’”

Some folks will argue, “Well, what’s wrong with the Mom character being nice?” You must look at the overall structure of the story. If you delete all people of Mexican descent from the imagery onscreen, then only have one interaction with a person of Mexican descent, and that one interaction is one of a white savior uplifting the Mexican, THAT IS RACIST. But, because it is cushioned in the decade-plus depiction of a warm, interesting family, we will accept it. We will say, “Oh, but it’s still such a wonderful film.” We will say, “Oh, but didn’t Linklater really accomplish something with this.” We will say, “Look at how brilliant we can be.” We won’t say, “Damn, we made a really racist film.” Ever. I mean, it’s not like we have the KKK running around lynching people, right?

This isn’t the first time that scene has been a focus for critics of the film. Back in August, the Daily Dot's Jaime Woo wrote:

Logically, it feels like a stretch: the initial exchange so brief and minor that his evolution feels unearned. Worse, Ernesto’s journey relies on an audience that has internalized the idea that Olivia’s words could have such effect, a trope on race and class called-out incisively by the show “Cougar Town”: “If there’s anything we’ve learned from Michelle Pfeiffer in “Dangerous Minds” or Sandy Bullock in “The Blind Side” or Hilary Swank in that movie nobody ever saw, it’s that all you need to fix minority problems is a really pretty white woman.”

Jose Solís at the Film Experience has a different idea. What if the absence of Latinos in significant roles is a function of Mason’s point of view, the way that his father and mother, who are named Mason Sr. and Olivia in the body of the film, are credited in the end as “Dad” and “Mom”? Maybe there are no Latinos because Mason doesn’t notice them, because “Boyhood” is the story of a boy who grows up to be a racist. He writes:

Being a huge fan of Mr. Linklater’s work, I came up with my own justification: while Boyhood” itself is not racist, perhaps the boy in question is. Think about it, the film is clearly Mason’s (Ellar Coltrane) story and as such, we can safely assume that everything is seen from his perspective. But is he a reliable narrator when it comes to political correctness and tolerance? As a Caucasian, heterosexual male, growing up in one of the most conservative states in America, wouldn’t it make sense that Mason would grow up to be racist?

Looking past the “Room 237? nature of this particular explanation, not to mention the implication that racists are primarily political conservatives — see the aforementioned “The Blind Side,” not to mention Hollywood’s long history of condescending uplift — the fact that the movie is nearly devoid of non-white characters, let alone any discussion of race, would make it impossible to tell. The Atlantic’s Imran Siddiquee phrased it in less fantastical terms:

In this tale of a white family living in a state that borders Mexico, isn’t it strange that the only time they’re shown truly interacting with a Spanish-speaking non-white individual is when they are saving them from a life of manual labor? Perhaps we’re meant to gather from this that Mason is aware of the barriers that those with brown skin must overcome to make it in a place like Texas, but unlike the film’s references to other forms of discrimination, it’s not made obvious.

Just because (probably) White people made a movie where White characters are front and center, that doesn’t mean the movie is actually racist as well. It just makes it a false representation. A story. A vision. A fable.

By the way: are there any Latinos in front of the camera in Boyhood’s rival Birdman?

Not that I can recall, and Birdman is written by four Spanish-speaking gentlemen. Hollywood used to make movies with Mexican characters, but somewhere along the line it stopped.