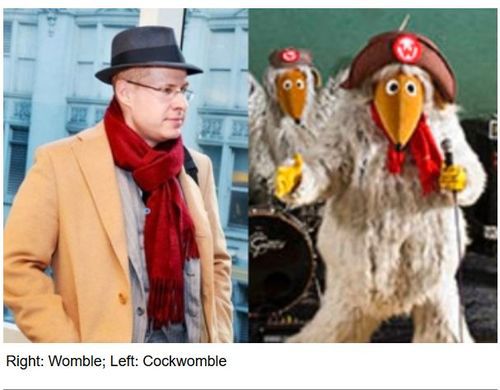 See, earlier Max Boot Is Dispirited After Being Called a "Cockwomble," Suspects Russians Bots Are to Blame

Mark Steyn follows up on the question of whether Max Boot is cockwomble. (For the censors, our position is that "cockwomble" is not as rude a word as it sounds—and in any case, it's obviouly true.)

Les gilets jaunes shut down Paris for yet another weekend following Sa Majesté le Grand Macron's imperious pronouncement to his ingrate subjects: "Let them pool cars!" France held its presidential election in the wake of Brexit and Trump, and the country's elite were terrified by the prospect of outsider Marine Le Pen prevailing over the despised incumbent Hollande. So the insiders came up with an outsider of their own, an ersatz outsider called Macron. That's working out about as well as might have been expected. The insiders might have done better to let Mme Le Pen win and then destroy the outsider's presidency from the inside, as Washington's insiders have tried to do for two years (culminating in the impeachment fever this weekend).

Among the admirers of M Macron was my old editor at The Wall Street Journal, Max Boot, a NeverTrumper who's now "left the right" and, following an on-air altercation at Fox, took a swipe at Tucker Carlson for "yukking it up with Mark Steyn" over Russia. But in these fractious times we must find our yuks where we can. So last year Max Tweeted:

To defeat populism, America needs its own Macron--a charismatic leader who can make centrism cool.

Macron is cool mainly in the sense of cold and frosty and heartless - hence the 23 per cent approval rating. So much for all that charisma: that and 3.95€ will get you a café au lait. So poor old Boot's year-old Tweet got dusted off last week and subjected to much mockery, which he used to bolster his thesis that all these French protests are the work of Russian bots. Boy, I'll bet Louis XVI wishes he'd thought of that one.

If you're having trouble keeping track, the French protests, Trump, Brexit, the Austrian and Italian elections, and the sudden cancellation of the "Murphy Brown" reboot are all the work of Russian bots. Whereas the Tijuana caravan, the UK grooming gangs and that rental car heading toward you on the sidewalk outside the Berlin Christmas market are the authentic vox populi.

Anyway, my main interest in Max's defense of the inept and unfeeling Macron was this riposte from Katie Hopkins to Boot's blaming of the bots:

The world thinks you are a cockwomble, sir. If you are looking for someone to blame - find a mirror darling.

I have no idea what a 'cockwomble' is, but it doesn't sound like a compliment.

"Cockwomble" was new to me, too, but the etymological analysis of Steve Sailer's British correspondent seems persuasive - with "cock" in the sense of fool, perhaps with a whiff of the Australianism "soft cock" about it. It would also be pleasing to think it something of a portmanteau with a hint of "coxscomb" in the sense of the medieval court jester's hat or the seventeeth-century fop.

At any rate, it's an enviable epithet. Indeed, Max Boot appears to be the first American ever to be called a cockwomble. The latter syllables derive, of course, from Elizabeth Beresford's beloved children's classic and their UK hit-parade incarnation in the Seventies. Here they are - the actual Wombles, not some knock-off tribute group - performing live on the BBC a couple of years ago. In the spirit of the season, we wish Max Boot a Cockwombling Merry Christmas:

More on Boot and the Wombles at Among the Cockwombles, SteynOnline.com, December 10, 2018.