According to the imaginativeÂ New York Times, illegal immigration from Mexico has "sputtered to a trickle" - a conclusion that is overblown at best, and a pravda-esqe lie at worst.

But not to worry. Even more far-flung and diverse invaders are filling in the gap, if there is one. Though distant, the nation of India has been stepping into the senders column, shown by an uptick of Indian crossers via Mexico. India is home to 1.2 billion people, 17 percent of the world's population, so there is no shortage of potential sendees.

Interestingly, even though India's economy is growing at 9 percent annually, thousands are spending big money to enter this country illegally and steal American jobs.

Below, in overpopulated India, many residents depend on public transportation. 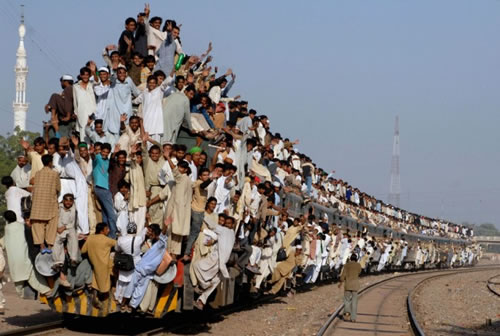 LOS FRESNOS, Texas (AP) - Police wearing berets and bulletproof vests broke down the door of a Guatemala City apartment in February hunting for illegal drugs. Instead, they found a different kind of illicit shipment: 27 immigrants from India packed into two locked rooms.

The Indians, whose hiding space was furnished only with soiled mattresses, claimed to be on vacation. But authorities quickly concluded they were waiting to be smuggled into the United States via an 11,000-mile pipeline of human cargo - the same network that has transported thousands of illegal immigrants from India, through Central America and Mexico and over the sandy banks of the Rio Grande during the past two years.

Indians have arrived in droves even as the overall number of illegal immigrants entering the U.S. has dropped dramatically, in large part because of the sluggish American economy. And with fewer Mexicans and Central Americans crossing the border, smugglers are eager for more "high-value cargo" like Indians, some of whom are willing to pay more than $20,000 for the journey.

"Being the businessmen they are, they need to start looking for ways to supplement that work," said Rosendo Hinojosa, chief of the U.S. Border Patrol's Rio Grande Valley Sector, at the southernmost tip of Texas, which is the most active nationwide for apprehending Indian nationals.

Between October 2009 and March 2011, the Border Patrol detained at least 2,600 illegal immigrants from India, a dramatic rise over the typical 150 to 300 arrests per year.

The influx has been so pronounced that in May, Homeland Security Secretary Janet Napolitano told a Senate committee that at some point this year, Indians will account for about 1 in 3 non-Mexican illegal immigrants caught in South Texas.

Most of the border-jumpers are seeking jobs, even though India's economy is growing at about 9 percent per year. Once safely inside the U.S., they fan out across the country, often relying on relatives who are already here to arrange jobs and housing.

Indians have flooded into Texas in part because U.S. authorities have cracked down on the traditional ways they used to come here, such as entering through airports with student or work visas. The tougher enforcement has made it harder for immigrants to use visas listing non-existent universities or phantom companies.

Also contributing to the spike was a quiet change in travel requirements in Guatemala, El Salvador, Nicaragua and Honduras. Beginning in 2009, those nations sought to attract investors by allowing visitors from India to enter without visas.

Mexican authorities have been unable to stop smugglers from moving illegal Indian immigrants over their country's southern border, then north to Texas. Instead, Mexico asked neighboring Guatemala to restore the visa requirement for Indians, which it did June 6.

Still, the lack of a visa requirement allowed at least 8,300 Indians to enter Guatemala and fewer than 28 percent of them exited legally, according to Enrique Degenhart, director of Guatemalan immigration. The others disappeared to continue heading north.

Indeed, the group of Indians police discovered in Guatemala City eventually went free because, at the time, they were in Guatemala legally.

Meanwhile, El Salvador, Nicaragua and Honduras still don't require visas for Indians, meaning smugglers can shift routes and use those countries as alternate jumping-off points for the journey north.

El Salvador's director of immigration, Ruben Alvarado, said officials have begun quizzing arriving Indians about what Salvadoran tourist sites they intend to visit in an attempt to spot those entering the country simply to head north.

Indians caught by U.S. authorities often claim they fled their homeland because of religious persecution. Then they wait for months in federal detention centers like Port Isabel, in the town of Los Fresnos, about an hour's drive from the Texas-Mexico border.

On a recent morning at Port Isabel, young Indian men wearing navy blue detention uniforms filled the benches in Immigration Judge Keith Hunsucker's courtroom. Sixteen of the 32 cases on the docket were Indian immigrants, including Salimbhai Mansiya, from the state of Gujarat, who had been detained more than a month earlier.

Through an interpreter, Mansiya told the judge that he needed more time to find an English speaker who could help him fill out an application for asylum. The judge ordered his case delayed.

The Justice Department's Executive Office for Immigration Review received 951 requests for asylum from Indian nationals between October and March - a six-month tally nearly equal to 1,002 asylum requests received from Indians in all of fiscal 2010.

Some seeking asylum can arrange to have their bond paid and are set free. Then they melt into American society and skip subsequent court dates. Immigration courts eventually order them deported, but only in absentia.

Many of those detained in South Texas hail from Indian states such as Punjab and Gujarat, places that are relatively well-to-do and where it's common for people to seek greater fortunes abroad even if they are financially secure at home.

Pramod Kumar, a political scientist at the Institute for Development and Communication in the Punjab capital of Chandigarh, said immigrating to other countries is an important regional tradition that's even reflected in state folk songs.

If people face dire economic straits, "you try and sell your land and go abroad," Kumar said. "If you're prosperous, still you go abroad because, culturally, it gives you a higher status."

Many immigrants take jobs driving trucks or taxis or working on farms. Initially, the pay is not substantially greater than they would make back home, but simply living in the West elevates their social standing in India. And over time, their earnings increase, Kumar said.

Smugglers often move their cargo from India to Mexico via intermediate stops such as Hong Kong and Macao and other parts of China, as well as Singapore, Amsterdam, Ecuador, Brazil, Belize and Panama.

By the time they reach American soil, Indians are mingled with groups of Mexicans and Central Americans. They are often captured after swimming the Rio Grande or traversing it in rafts. Almost none carry identification or speak English or Spanish, Hinojosa said.

Many of the Indians apprehended are Sikhs, followers of India's fourth-largest religion, who tell authorities they face persecution back home and want asylum. Applicants need to convince officials that they have a credible fear of persecution in India. If so, the case is referred to an immigration judge.

Such persecution was common in the mid-1980s, when the state battled a Sikh secessionist movement, Kumar said. But today the ruling party in Punjab is Akali Dal, a Sikh party, and Indian Prime Minister Manmohan Singh is also Sikh.

"It's all nonsense," Kumar said of asylum claims.