It’s pretty safe to assume that hate crime hoaxes — particularly regarding Muslims — will explode off the charts during the Trump administration. Varieties of faked hate have been roiling communities and college campuses for years with no let up. One count finds 100 hate crime hoaxes in the last decade, and the Trump presidency is sure to inspire even greater phony-baloney victimhood.

One memorable freakout occurred in 2012 when an Iraqi Muslim man residing in El Cajon murdered his wife and faked it as a hate crime: the town’s Muslims went nuts, hysterically blaming Islam critics like Robert Spencer and Pamela Geller for creating “Islamophobia” thereby causing the crime.

Kassim Alhimidi murdered his wife Shaima Alawadi (whose photo he holds) and blamed the crime on some hateful American. Alhimidi is now serving 26 years to life in state prison. 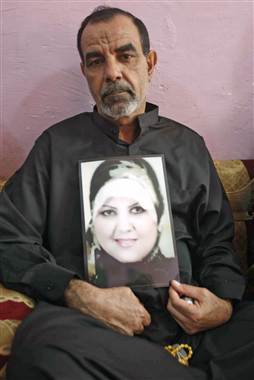 Speaking of Robert Spencer, he takes up the topic of fake hate in his most recent 5-minute explainer about several crimes that never happened as described by Muslim “victims.” Do police in Islamic nations not do detailed investigations of crime? Muslim immigrants seem to expect their word to be taken at face value by authorities, which does not happen here.

It’s a recurring and strange phenomenon: anti-Muslim hate crimes that turn out to be none of those words.

This one was especially egregious and heartbreaking — or at least that’s the way it seemed. The Huffington Post headlined its story with this:

Islamophobia Just Drove This Boy And His Family Out Of America

There was just one catch: none of it was true. The article began this way:

“I’m done with the U.S.,” Zeeshan-ul-hassan Usmani’s wife told him on Friday. Seeing her youngest son, just 7 years old, walk off the school bus bruised and battered that afternoon outside their apartment building in Cary, North Carolina, was the final straw.

It seems that the Usmanis’ son, “little Abdul Aziz, a first-grader and the youngest child of Usmani and Binish Bhagwanee, was traumatized.” The trauma came from bullying by his schoolmates that specifically focused upon the boy’s Muslim faith:

[He] told his parents a classmate had tried to force him to eat food that wasn’t halal. When Abdul Aziz refused, five of his classmates ganged up on him, making fun of his name. They punched him in the face, kicked him in the stomach, and twisted his arm while calling him “Muslim” again and again, Usmani said.

But there were problems with the story from the beginning. If Usmani’s claim were true — “They keep beating him all the way from school to home on the bus” — then the boy would have suffered extensive injuries, and the bus would have been in an uproar, as anyone who has ever ridden a school bus knows. Instead, after an investigation, school officials announced:

I don’t know how far young Abdul Aziz lives away from school, but in a photo of him that was released after the supposed attack, the boy has his arm in a sling but otherwise looks happily unscathed. He hardly looks like a boy who has just been beaten all the way home from school. No facial marks whatsoever. Nary a bruise. No black eye. No fat lip. The bullies were strikingly ineffectual — if they existed at all, and it looks as if they didn’t.

So here we go again. Hate crimes are political capital, which is why we keep seeing fabricated hate crimes like this one. When real ones don’t exist, they must be invented.

The Hamas-linked Council on American-Islamic Relations (CAIR) and other Muslims have on many occasions not hesitated to stoop even to fabricating “hate crimes,” including attacks on mosques.

This kind of thing happens quite frequently. The New York Daily News reported this one not long ago:

[A] woman who told cops she was called a terrorist and slashed on her cheek in lower Manhattan on Thursday later admitted she made up the story, police said early Friday. The woman, who wore a headscarf, told authorities a blade-wielding wacko sliced open her face as she left a Manhattan cosmetology school, police sources said.

Recently in Britain, the murder of a popular imam was spread far and wide as another “Islamophobic hate crime” — until his killer also was found to be a Muslim. And why had another Muslim murdered him? The Mirror reported that the imam “was targeted because he had made efforts to turn youngsters away from radical Islam.”

There is much, much more in this vein. According to The Detroit News, a Muslim woman, Saida Chatti, cooked up this one:

And similarly in Britain:

[A Muslim woman was] fined for lying to police about being attacked for wearing a hijab. The 18-year-old student, known only as Miss Choudhury, said she was violently shoved from behind and punched in the face by a man in Birmingham city centre 10 days after the atrocities in the French capital on November 13.

Despite school officials’ findings in the case of young Abdul Aziz Usmani, watch for this one to show up in the “hate crimes” list of the Hamas-linked Council on American-Islamic Relations.

It’s what they do.