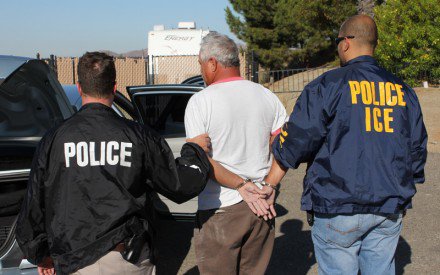 I've reported on the ongoing attempt by radical leftist groups to make more and more areas "no-go" for immigration law enforcement.  Essentially, the left does not want any illegal aliens arrested.

Slowly these radicals imposed their will on immigration enforcement regardless of administration.  First it was churches, then primary and secondary schools, then hospitals, and then colleges and universities.  The list is designed to give sanctuary to illegal aliens wherever they might be, and the list is expanding.  Now courthouses, where illegal aliens go to answer for their criminal act,s are to be one of the "no-go" areas for U.S. Immigration and Customs Enforcement, Enforcement and Removal Operations, ICE ERO, something this blog predicted.

Advocates Seek to Make Courthouses Off Limits for Immigration Officials

Rosario Socope, a Guatemalan immigrant in the country illegally, had an unwelcome surprise waiting for her when she attended a pretrial hearing on a felony charge at a courthouse in Brooklyn this month. As she stepped out of the courtroom into a public hallway, she was approached by immigration agents seeking to deport her.

As her husband, her social worker and one of her lawyers looked on aghast, the agents hauled her away.

Of course, ICE ERO is only making arrests at courthouses because that is where high priority criminal aliens are found, and given that law enforcement agencies are conspiring to shield illegal aliens, it is a logical place to go to arrest illegal aliens.

The encounter was only the most recent in a long series of such cases across the country that immigrant advocates and politicians say have spread fear of courthouses among immigrants and eroded their willingness to participate in the judicial system, with profound civil rights implications.

There are no "civil rights" implications, as illegal aliens are subject to arrest anywhere they are, including churches, hospitals, schools, and, especially, courthouses.  No law enforcement agency in this country has a "no-go" area for arrests.  Only the Department of Homeland Security practices such a medieval sanctuary policy.

ICE ERO wants to keep this new sanctuary quiet, but nothing satisfies the radical left except complete capitulation, and it appears to be only a matter of time before ICE ERO is forced to publicly acknowledge this new policy.

In March, top officials at the agency updated their guidance for field agents conducting enforcement actions at or near courthouses, Virginia Kice, an agency spokeswoman, said. Agency officials declined to publicly discuss the contents of the new courthouse guidance, saying it was confidential. But officials did not modify the 2011 memo to extend its protections to courthouses.

Ms. Lin said that in a private meeting in March with several top officials from the agency, they told her that under the new guidelines agents would conduct enforcement actions at courthouses only against undocumented immigrants considered top priorities, including those convicted of serious crimes and people deemed a threat to public safety.

All actions would occur in nonpublic areas of the courthouse, the officials said, according to Ms. Lin. The officials also told her that courthouses were “well suited” for detentions because they were safer for the agents than confronting someone in their home where encounters were more likely to escalate into violence.

This policy will be unworkable.  It will be impossible to arrest an illegal alien in a "non-public" area of the courthouse without the cooperation of the Sheriff or court officials, and there will be little or no cooperation from those parties.

The new ICE ERO policy is obviously a fig-leaf for total abandonment of immigration enforcement at courthouses and in the rest of the country.  What will be the next demand? What Chuck Schumer is demanding, complete surrender.