On Saturday I made a rare trek to see a first-run movie, because of my curiosity about Hollywood’s treatment of an instance of defending western civilization. The new movie Monuments Men modifies the true story of the World War II officers who rescued works of art from Hitler’s theft. A project of George Clooney, the film is positive toward saving even religious statues and paintings, presumably because Nazis are a liberal-approved enemy, safe to denigrate.

In the trailer, actor-director-writer Clooney (as real-life Lieutenant Commander George L. Stout) says, “You can wipe out an entire generation, you can burn their homes to the ground, and somehow they’ll still find their way back. But if you destroy their history, destroy their achievements, then it’s as if they never existed. That’s what Hitler wants, that is exactly what we’re fighting for.”

The sentiment is a very worthwhile one and needs to be repeated often these days when the achievements of European civilization are belittled by the left.

The movie suffers from the Hollywood prime directive of entertainment. So the beginning seems a bit like The Dirty Dozen Art Historians, as the men are assembled for service (although the number is seven). The nod toward comedy is shown by the inclusion of John Goodman and Bill Murray appearing as art rescuers. There’s nothing wrong with humor-based soldier bonding; in fact, it’s a staple of war movies. But the comic asides add to a certain lack of focus, particularly when the group is separated to show the search for hidden stolen art around Europe. Still, there’s a lot to like — a first-rate cast, adventure mixed with a great purpose and the happy ending of cultural treasures being saved from oblivion. Thumbs up! 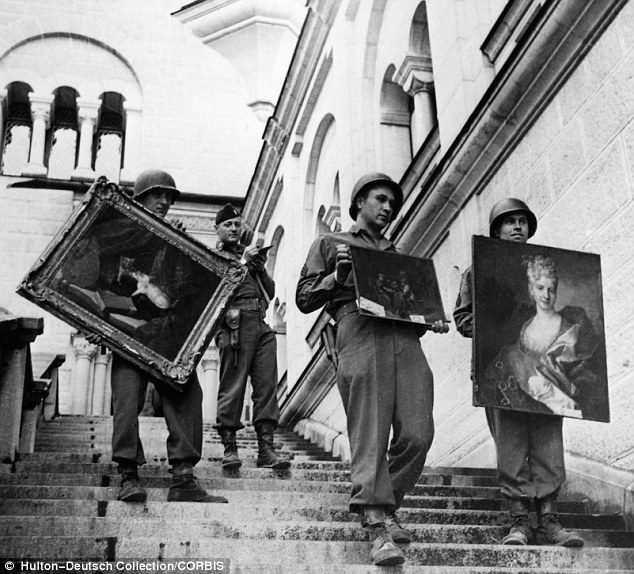 The real Monuments Men have a great champion in Robert Edsel, who created a foundation to preserve the memory of their work and celebrate their little-known accomplishments. He authored a book The Monuments Men: Allied Heroes, Nazi Thieves, and the Greatest Treasure Hunt in History. Edsel spoke at the World War Two Museum in 2009, providing a thorough introduction of how European masterpieces were saved from Nazi destruction:

For another realistic presentation see the 2006 documentary The Rape of Europa, which can be found online. An earlier Hollywood effort is The Train, a 1964 film by John Frankenheimer starring Burt Lancaster as a French resistance engineer who appropriates a trainload of stolen art from the Nazis. You can watch a free version, albeit with Spanish subtitles here.

But even with the recent film, Hollywood remains an undependable defender of foundational western values like free speech. The Investigative Project has a list of 10 mainstream films banned in the Middle East, including The Matrix Reloaded and The Wrestler. Hollywood’s response has been to practice self-censorship, particularly obvious in the disappearance of Muslim terrorists in film and TV, notably in the hit series 24 after Muslim complaints. Terrorist bombers are now Serbians, South Africans — anything but Muslims even though Allah’s servants kill daily in the name of Islam.

And what about the art that was rescued in WWII? Will Hollywood liberals defend it as enthusiastically from Muslims as from Hitler? Islam forbids the celebration of the human body, particularly when unclothed, which is a staple of European culture starting with the Greeks. Plus Muslims can hardly abide the existence of women, much less sympathetic portraits of them hanging in galleries.

In 2012, the Louvre opened a wing of Islamic art, but that gesture won’t save the Paris museum if even a tiny percent of France’s five million Muslims decide to tear it apart. The Muslims destroy their own heritage without a second thought, as when jihadists leveled historic Sufi sites in Timbuktu in 2012. Muslim immigrants have even less respect for the infidel culture they chose to inhabit far from dar al-Islam. The cultural conflict in Europe can only worsen over time given the demographic change caused by the disaster of Muslim immigration.

Today however, Hollywood has in its way stood on the side of freedom against tyranny. Let’s hope it doesn’t forget to defend western values in the future.