A Vermont man was killed in Montpelier on Sunday, the state capital’s first murder in almost a century.

Suspect Jayveon Caballero, 29, is believed to have shot and killed his acquaintance Markus Austin in an apartment complex parking lot around 4:30 a.m.

Police Chief Anthony Facos said that the killing after a night out at a bar was the first murder since the 1920s in Montpelier, which at 7,500 residents is the country’s least populous state capital.

The Census Bureau lists Montpelier as one percent black.  That's one in a hundred.  The probability that, in any given year, a homicide is committed in Montpelier by a black person is therefore, by the basic arithmetic of probability, assuming no race differentials in homicide rates, one in ten thousand.

If you pile on the probability that the victim is also black, and assume all other factors are equal, this is a one-in-a-million event.

Of course, all other factors are not equal.  Blacks commit homicide at seven or eight times the nonblack rate, 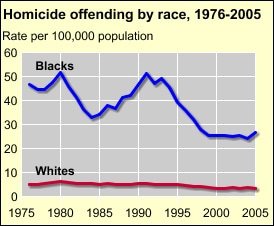 and they mostly kill other blacks.  Still and all, I think we can call this a jubilee year for Montpelier — the year Montpelierians, after a century of slumbering in White Privilege, whole-heartedly celebrated Diversity at last!