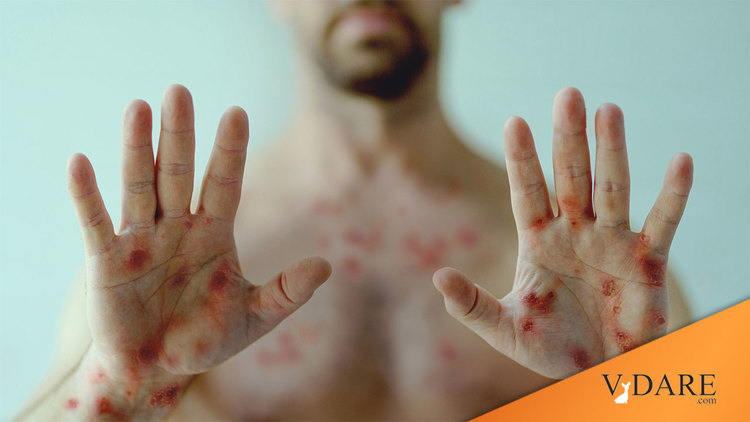 What about race? I would have figured that in the early days it would be focused on gays who’d been to Europe or to expensive circuit parties in the U.S., rather like COVID in the late winter of 2020 was heavily concentrated among skiers back when Norm MacDonald called it “Tom Hanks’ Disease.”

Most monkeypox patients are people of color in a sampling of cases where race and ethnicity are known, a CDC official told clinicians Tuesday, with 38 percent White, 32 percent Latino and 26 percent Black.

I don’t see those numbers in the slide, but do see this table for a couple of hundred guys who got the antiviral TPOXX, and they are skewed 36% Hispanic and only about 25-30% non-Hispanic white (depending upon how many Hispanics identified as black): By the way, this suggests that whites are slightly less likely to get the medicine, contrary to the WP’s implication.

In New York City, monkeypox skews a little whiter at 42% of the known cases:

But what are the demographics of gays in NYC? A 2017 survey by the city government found:

As of July 14, Whites in D.C. made up 65 percent of monkeypox cases and 76 percent of the vaccinated.

My impression is that D.C. is full of white gays who moved there, but I can’t find any data on the question.

In an interview, Kinsley said North Carolina’s monkeypox cases are disproportionately among Black men who have sex with men.