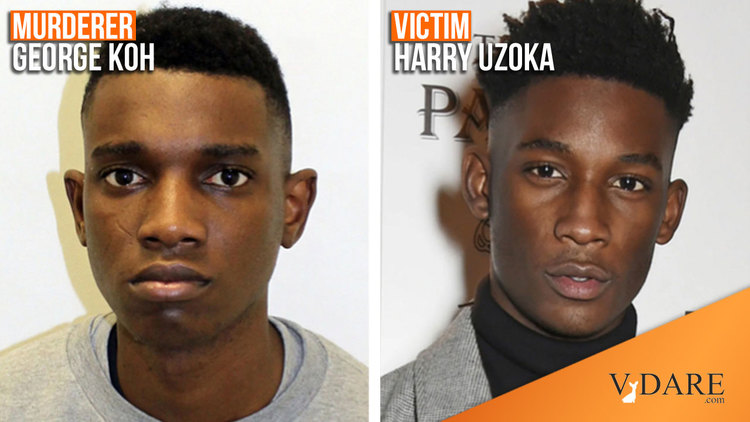 Model Citizens: Even Male Models Might Murder Each Other When They Are Black

The male modeling business was seldom known for, say, Zoolander and Hansel fighting to the death. But then along came Black Lives Matter, so the London fashion world has recently been culturally enriched by one black male model murdering another one.

The Tragedy of Harry Uzoka

He was a shining star of a tight-knit group of rising Black male models in London. Why did he die at the hands of another model?

When Harry Uzoka was 17, he went with his older brother, who was trying to get ahead in modeling, to a meeting at a talent agency in West London, a place of fairy-tale wealth with Edwardian homes and fertile parks. Uzoka grew up in Dagenham, a working-class neighborhood across the city with a growing Nigerian community. He and his brother were raised by a mother who, like other West African immigrants, traded her homeland for London — cold and indifferent but also possessing free education and more jobs — so that her children could thrive. Uzoka did well in school, but he had recently served a stint in juvenile detention for robbing a cash-delivery van.

And then about ten million words about how the British fashion business was prejudiced against black male models, but now they are in fashion.

… At 25, Harry Uzoka had become one of Britain’s most adored male models. And so it later shocked his friends, family and much of the fashion industry that on a clear winter day in 2018, Uzoka was killed by another rising Black male model named George Koh.

And then back to a few more million words about white people’s attitudes toward blackness made it tough on the somewhat less successful African model George Koh, who responded by ginning up rapper-style beefs with the big star Uzoka:

As the culture evolved, young men like Uzoka seemed to no longer view modeling as incompatible with their masculinity. Succeeding in an industry that valued beauty required male models to show aspects of themselves that could make them uneasy, like their femininity and vulnerability. But making money off your looks became a flex, a skill that could garner fame and access to the same luxuries more conventional celebrities had. And so two at-times-conflicting ideas lay under the hierarchy of male modeling: beauty and the openness it required, and a conception of manliness that still prized dominance and swagger. …

Two days after their phone conversation, Koh texted Uzoka. “Where you,” he wrote. “I’ll come there we can fight, bring your friends with you.”

Koh persuaded Okigbo and another longtime friend, Merse Dikanda, to accompany him….

“Come Shepherd’s Bush,” Uzoka responded over text, referring to the neighborhood where he lived. Within minutes, Koh showed up near Uzoka’s flat, holding a knife in each hand. Dikanda carried a machete.

Uzoka and his roommate, Adrian Harper, took apart a set of dumbbells in their living room, Harper later testified. Armed with the metal bars, they went into the street.

Is a street fight with metal weapons really a good idea for professional models?

Across a parking lot, they saw Koh and his friends walking away. “Yo, George!” Uzoka called out. The men turned around, and the groups approached each other.

While Okigbo chased Harper back to the flat, Koh and Dikanda cornered Uzoka between two cars, his back against a fence. A neighbor who passed them at that moment later testified that Uzoka “was standing like he might have been a little scared.” He swung the metal bar he had brought with him, but Koh stabbed Uzoka three times, piercing his heart.

At least our society has progressed far enough away from racism so that no nonblack would dare suggest to blacks that they try murdering each other less and see how that works out for them.