Up north in the Twin Cities, home to the largest population of Somalis in the United States, the Muslim immigrant freeloaders organized a protest to complain about the quality of free food they were getting because none was halal.

You may have heard that “beggars can’t be choosers” but that idea is hopelessly old-fashioned in today’s liberal values. It’s simply racist to deny a diverse tribe their ethnically appropriate free stuff because it would damage their self-esteem.

Below, emaciated Somalis plead for freebie food slaughtered according to Allah. 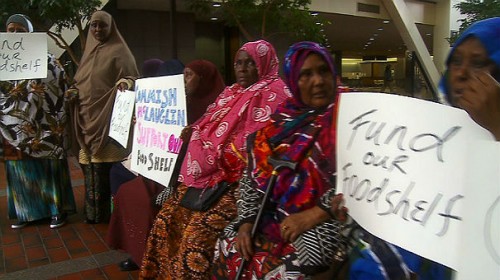 Remember that the halal Islamic slaughter process is condemned because it is unnecessarily cruel. In western slaughterhouses, the animal is stunned into unconsciousness before being killed, but Islam insists that the creature be fully conscious while being slaughtered. See the Daily Mail’s report, Horror at halal slaughterhouse.

And don’t think the Minnesota Somalis are pining for some nice organic tofu. A woman from Peta suggested a vegetarian Eid to some India-residing Muslims and was attacked by an angry mob for her trouble. She had to be rescued by police from rock throwers.

Back to Minnesota mooching…

“Isuroon has reached out for Hennepin County’s support for the Ethnic Food Shelf, and has cooperated fully with the Hennepin County commissioner’s office and provided the county with their required qualifications,” the group said in a statement. “The commissioner’s office has ignored Isuroon’s requests for review and the community needs to respond to let the public know what has transpired.”

The Rally Against Hunger began at 11 a.m. Monday at the Hennepin County Government Center.

“We want to make Commissioner Peter McLaughlin and the public know that we are serious about our need for an Ethnic Food Shelf which provides halal and appropriate nutrition for our community,” the group said.

Post
After Such Knowledge, No Forgiveness For Dr. Seuss