Oh, the horror! Illegal aliens feel it necessary to flee Trump’s America where immigration laws are enforced (at least to a degree) for CANADA in DECEMBER! After all, our northerly neighbor is known to be welcoming, particularly since Justin Trudeau became prime minister.

In fact, Trudeau responded to President Trump’s limited immigration ban of last January by tweeting “To those fleeing persecution, terror & war, Canadians will welcome you, regardless of your faith. Diversity is our strength #WelcomeToCanada.”

The Washington Post front-paged a chilly photo on Saturday to show the frozen wastes of Canada that fleeing aliens must face — brr! 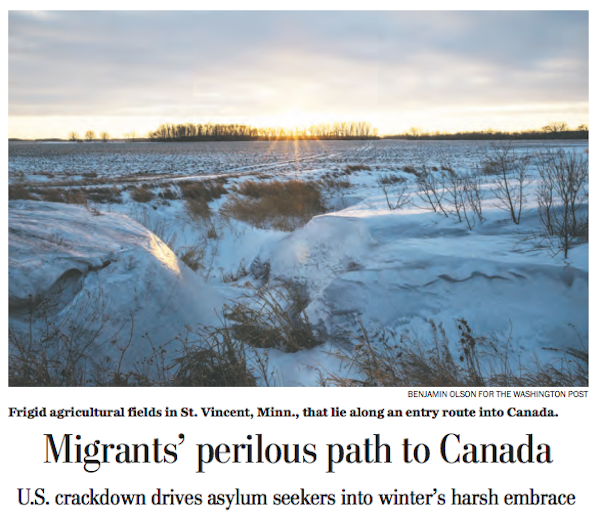 The Post frets that the illegal aliens will turn into icicles in the snow — ignoring the fact that plenty were smart to enough to break into Canada during the warmer months preceding December. But any reasonable discussion would spoil the sob story!

NOYES, Minn. – Chad Cosley tracks them as if they were deer.

He looks for footprints and frequently checks his network of trail cameras, which had been documenting wildlife along the U.S.-Canada border but now also capture would-be refugees fleeing the United States under President Donald Trump.

“I was up there hunting just on November 4, and we had fresh snow,” said Cosley, 45, who owns a parcel delivery service. “The following morning, we had four sets of footprints walking all the way up to the border with Canada, and there was a glove laying there on the ground – brand new, with perfume on it – so it was definitely a gal.”

Since the start of the year, more than 1,000 people have made similar journeys through this tiny community in far northwestern Minnesota in an attempt to enter Canada by avoiding official border crossings, part of a nationwide surge as Trump advances his campaign pledge to make life uninviting for undocumented immigrants and some aspiring refugees. The exodus, also playing out in border towns in the Northeast that lead to Quebec and Ontario, is rattling local officials on both sides of the border who are now angry about being shoved onto the front lines of America’s divisive immigration debate.

A Ghanaian woman’s body was found in a ditch near this small Minnesota town in May. She was an asylum seeker who succumbed to hypothermia while trying to cross the border. Residents fear there will be calamities in coming months as travelers encounter winter here, when a frigid northwestern wind scours barren fields separating Minnesota from Canada’s Manitoba province, making the traverse through blizzards and across frozen swamps a harrowing and life-threatening trip.

The concern has intensified, with county officials publicly calling on the Trump administration and Canada to waive a policy that prevents would-be refugees from passing through official border crossings. That plea has been met with silence.

Although rural Minnesota overwhelmingly supported Trump in last year’s election, some residents are troubled by his hard-line immigration policies, given the impact on their towns.

“For us, it’s a shocker to see these people wandering around,” said Leroy Clow, 73, a retired farmer and electrician. “It’s nice-dressed families – like they could be your neighbor – but they are scared and don’t know what else to do.”

According to the Canadian government, 9,335 people made asylum claims at land ports of entry between January and October, including those picked up after crossing the border from the United States at unauthorized locations. That is more than double the average of annual claims made from 2011 through 2016.

Counting asylum requests at airports, marine terminals and immigration offices, the Canadian government processed more than 41,000 applications this year through Oct. 31, nearly double the total processed in all of 2016.