Fundie Muslims around the world must be feeling pretty chipper these days. The last little while has been largely successful from their point of view. The so-called “Arab Spring” turned out to be an extremist smoke screen that disappointed much of the diversity-bewitched press, but was a big success for Islamists. The Muslim Brotherhood now runs Egypt, the cultural center of the Middle East. The Muslims ejected standing governments in Tunisia and Libya, and are agitating in Syria and elsewhere in the region. Things are going their way.

So it is not surprising that the Islamists chose 9/11 to invade the US Embassy in Cairo to insult the despised American infidels by tearing down the flag and replacing it with their own al Qaeda flag. 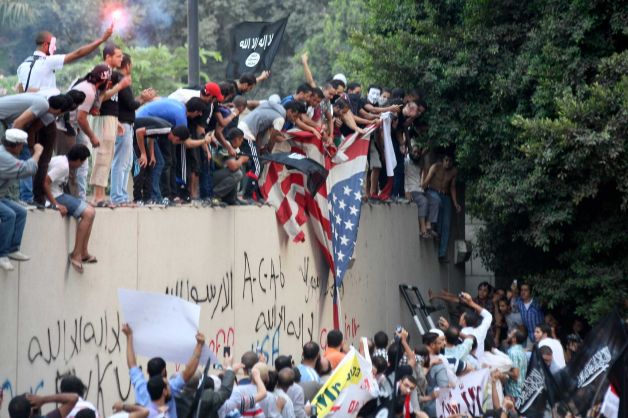 The Embassy of the United States in Cairo condemns the continuing efforts by misguided individuals to hurt the religious feelings of Muslims – as we condemn efforts to offend believers of all religions. Today, the 11th anniversary of the September 11, 2001 terrorist attacks on the United States, Americans are honoring our patriots and those who serve our nation as the fitting response to the enemies of democracy. Respect for religious beliefs is a cornerstone of American democracy. We firmly reject the actions by those who abuse the universal right of free speech to hurt the religious beliefs of others

Sensing a political faux paux brewing up, Obama later apologized for the apology, but the damage was already done: his government cowered in fearful deference to a mob of Islo-hoodlums.

Meanwhile a similar gang of Islamist thugs overran the US consulate in Benghazi, killing a State Department officer, and got a mild response from Secretary Clinton.

Anger over the film that some believe insults the Prophet Muhammad also led to protests in Cairo, where demonstrators climbed the walls of the U.S. embassy, took down the American flag and replaced it with a black flag.

“I condemn in the strongest terms the attack on our mission in Benghazi today,” Secretary of State Hillary Clinton said in a statement released tonight. “As we work to secure our personnel and facilities, we have confirmed that one of our State Department officers was killed. We are heartbroken by this terrible loss. Our thoughts and prayers are with his family and those who have suffered in this attack.” [. . .]

These attacks have a similar smell to the months-long Danish cartoon jihad a few years ago, where a few drawings were used by the Muslim propaganda machine to incite rioting and death around the world.

Guess what, hostile Muslims: speech criticizing Islam is not exactly a rare pursuit in free societies. If Pastor Terry Jones is making a film, it’s unlikely to be any more influential than the kind of commentary that goes on all the time. Jones was just a convenient excuse — the real agenda was to embarrass America on September 11.

More to the point, it’s very dangerous for Washington to be seen as fearful in the Middle East. The President and his underlings must not apologize for free speech. Perceived weakness will only incite a more frenzied mass jihad movement with additional embassy invasions and deaths to follow. Appeasement never works and doubly so with hostile Muslims.