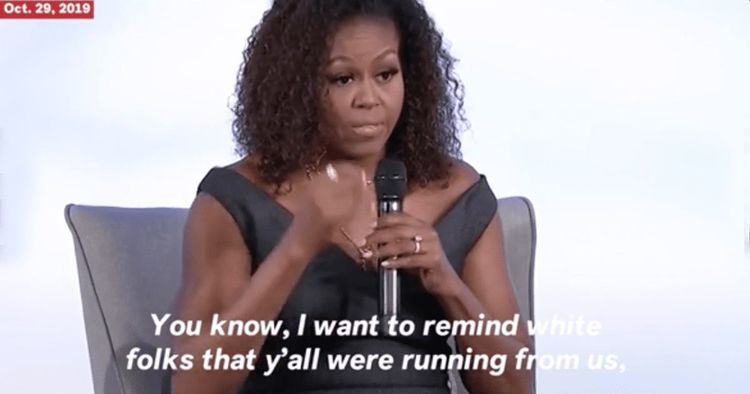 Also in the Whiteness Studies zone, here was former First Lady Michelle Obama speaking at an event in Chicago on Tuesday, complaining that in her childhood white people left the neighborhood when blacks moved in. And it's still happening! Quote:

As families like ours — upstanding families like ours who were doing everything we were supposed to do and better — as we moved in, white folks moved out because they were afraid of what our families represented … I want to remind white folks that y'all were running from us … This family, with all the values that you read about, you were running from us. And you're still running …

Let me see if I can explain White Flight to Mrs. Obama, who I assume is by now settled comfortably back at her estates in some lily-white jurisdiction like Martha's Vineyard. It's really not that difficult to understand.

In a number N of working-class black families there will be a number X who are dysfunctional or dangerous. In the same number N of working-class white families there will be a number Y who are dysfunctional or dangerous. It is invariably the case that X is much bigger than Y. Common observation tells us this, and all statistics and sociological studies confirm it.

We should by all means argue about the reasons for this major difference in proportions. I myself am convinced it is a race difference, like the behavioral differences between breeds of dogs.

Possibly I'm wrong: But working-class white Joe and Suzy have lives to get on with and children to raise. They're not much interested in bandying hypotheses or reading up on population genetics. When a black family settles in the street, then another, then another, they figure that the neighborhood is beginning to trend in the direction of more trouble and dysfunction. On a statistical basis, they're right. So they move out.

I don't see why any of this is hard to understand. It's normal human behavior. It's statistical common sense. Joe and Suzy are just going with the percentages, as we all do all the time.