I was reading Lee Billings’ forthcoming book Five Billion Years of Solitude: The Search for Life Among the Stars,

for a review that will appear in The American Spectator.  In Chapter 7 I came across this sentence:

Reconstructive efforts began in the late 1970s, when an astrophysicist named Michael Hart at NASA’s Goddard Space Flight Center simulated the faint young Sun’s effects on the evolution of Earth’s atmosphere and climate . . .

Now, I know a Michael Hart: the author of Understanding Human History

, a scholarly race-realist account of Homo sap. since the exodus from Africa.  I have met this Michael Hart at some Dissident Right dinners and conferences.  I had a vague recollection of hearing that he was formerly an astronomer.  Was this the same Michael Hart?

I got the phone number of race-realist Michael Hart from a mutual acquaintance and called him.  Was that him in the 1970s simulating the early climate of Earth?  Yes, he said, it was.  We then had a most interesting discussion about Billings’ larger topic, the prospects for intelligent life elsewhere.  (Michael thinks it is exceedingly rare; I am agnostic.)

As it happens, Michael Hart himself has a new book out recently: The Newton Awards: A History of Genius in Science and Technology 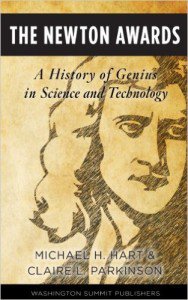 I did a review at Taki’s Magazine a few weeks ago.  Mangan blogs about it here.

Sample Michael’s outlook on the history of science while supporting one of the Dissident Right’s finest scholars: treat yourself to a copy of The Newton Awards

Footnote :  I should explain about that “reconstructing” in the quoted sentence above.

Chapter 7 of Billings’ book deals with the issue, obviously critical to estimating the probability of life in other solar systems, of habitability.  For a planet to be hospitable to the development of  life a necessary condition is that it be clement—not too hot, not too cold—for long stretches of time.  (There are of course other necessary conditions: it needs an atmosphere, etc.)  It needs to be orbiting its star in a habitable zone, not too close to the star and not too distant.

Planetary scientists thought they had a good understanding of habitable zones until, around the middle of the last century, we grasped how faint and cool the Sun was in its youth.  The earth’s surface should have been frozen for the entire first half of its history: not habitable.  That threw a wrench into habitable-zone theories until “Reconstructive efforts began . . .”