It’s rare to see a politician who understands the threat to jobs from technology and who will also name the problem. There is a fair amount reporting in the mainstream media about how automation and advanced software are increasingly replacing human workers, but this subject has been largely missing from the political sphere. Remarkably, the volumes of political chatter about the upcoming election have been pretty much devoid of the topic of mass technological unemployment.

The remarks of former New York City Mayor Michael Bloomberg are therefore a welcome acknowledgement of reality, particularly when he observed, “The greatest conundrum facing the next administration, and all of us, is how you create jobs when technology is destroying jobs at an alarming rate.”

Mayor Bloomberg should express those thoughts in Washington to the clueless elected representatives of the citizens — not that there are any easy solutions to the unemployment crisis galloping our way. The government could at least end immigration, which should now be placed on the junk heap of history’s outmoded institutions along with the buggy whip and homesteading.

Experts are warning that the machines are coming to perform tasks that earlier required human workers. The Gartner analytical company predicts that one-third of jobs will be performed by robots by 2025, and that trend goes beyond manufacturing to cognitive tasks like financial analysis and medical diagnostics. A 2013 report from Oxford University researchers estimated that “nearly half of U.S. jobs are vulnerable to computerization” in less than 20 years. A report this year from the consulting firm McKinsey and Company, found that 59 percent of manufacturing work could be automated in the next decade.

Predictable physical work is some of the most susceptible to automation, as illustrated in a McKinsey report: 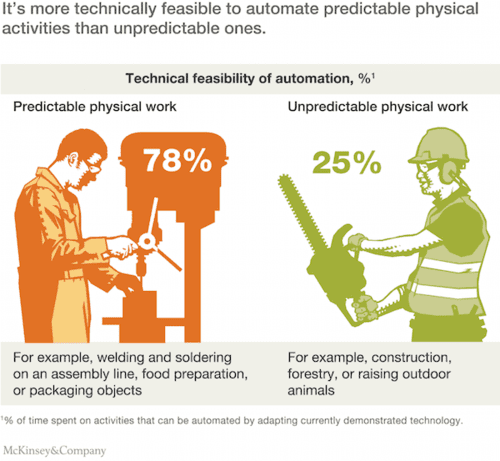 Unfortunately, Mayor Bloomberg is a liberal immigration proponent and doesn’t understand the law and borders aspect of Donald Trump’s appeal. But the mayor is right about technological unemployment.

Billionaire Michael Bloomberg spoke candidly about Wall Street and the US presidential election at his company’s 2017 Year Ahead conference on Tuesday.

In a conversation with Bloomberg News Editor-in-Chief John Micklethwait and Morgan Stanley CEO James Gorman, he started by describing what he would do if he were running for president.

“I’d have to defend the banks, which is not a particularly good strategy to get elected in this country today,” the business magnate said. “But we desperately need a good group of banks that are willing to take risks and make money so they can finance our growth. … The healthier the banks are, the healthier our economy will be.”

Bloomberg, who was mayor of New York City from 2002 to 2013, earlier this year chose not to enter the race for the White House. On Tuesday, he said he chose not to make a bid because of the way the two-party system is structured in the US. Those two parties control the legislature and would not let a third party into the fray if they could help it, he said.

“The main reason I didn’t run is if I ran, I would have been an incredible candidate, would have gotten a third of the electoral votes, nobody would have a majority, it would have gone to the House of Representatives, and they would have picked Donald Trump — and you just can’t do that to this country,” Bloomberg said to applause.

He then described why he thinks Trump appeals to a large swath of American voters.

Trump supporters are “petrified of their future,” Bloomberg said, and concerned that their social security will not be enough to provide for them in retirement. They’re losing jobs to technology, and their children are behaving differently than they’re used to.

On why many Americans believe Trump’s promises, or those of other politicians like Vermont Sen. Bernie Sanders, Bloomberg said:

“The average person with the education we’re providing our kids today doesn’t understand that we’ve stopped teaching civics, we’ve stopped teaching history, we no longer teach Western civilization. When they hear democratic socialism, which is what Bernie Sanders was promoting, [and think] ‘Yeah, yeah, democratic, that sounds good. And socialism, yeah, it’s like that social media stuff.’

“That’s what they think. They’ve never read about socialism before or communism, or anything. They have no knowledge of it. That’s unfortunately — the worse our schools get, the worse the results are going to be. And it’s pretty obvious what’s happening.”

Bloomberg said a number of big issues are facing the country.

“The greatest conundrum facing the next administration, and all of us, is how you create jobs when technology is destroying jobs at an alarming rate,” he said.

The only solution he can think of is for the government to create jobs, he said, adding that corporate America is not the answer because it is using technology “to do more with less.”