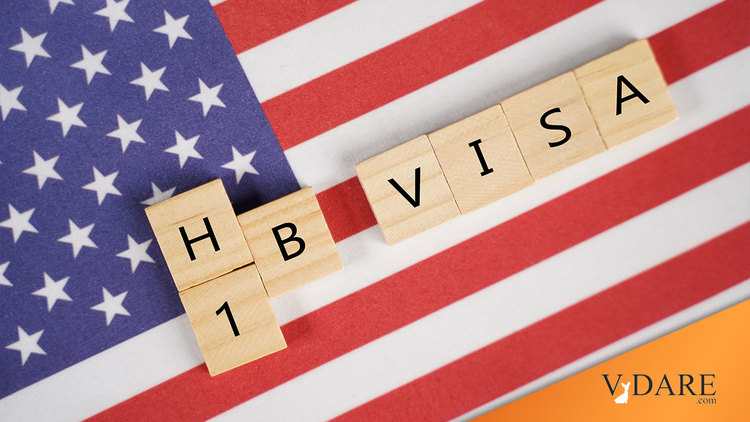 Miano and Obama on H-1Bs (We prefer Miano)

I see our old friend John Miano has published an incisive exposition of the revolting process by which that savage attack on the American Middle Class, the H-1B loophole , is lovingly protected in Congress:When Lobbyists Write Bills , Center for Immigration Studies. February 3, 2012.

By 1998, industry was seeking an expansion of the H-1B program. The House Judiciary Committee produced a bill that expanded the H-1B visa program but added protections for American workers…

Industry leaders screamed they would rather have no H-1B expansion than lose the ability to replace Americans with H-1B workers. When big money talks, Congress listens. The Republican leadership arranged for the substitution of a lobbyist-written "compromise" bill that eventually became law.

The firing of Americans and replacement by H-1B workers is in the law because of deliberate, affirmative action of lobbyists and lawmakers…

H-1B is, quite simply, the best legislation money can buy. Despite repeated calls by government audits to reform that H-1B program, no reform has been enacted. For 22 years, lobbyists have maintained ironclad control over the H-1B statute text.

This corruption is at least as effective at the White House. Consider Obama touts H-1B visas after dismissing woman’s objections By Neil Munro The Daily Caller 1/31/2012

On Tuesday, the White House’s website highlighted President Barack Obama’s campaign-trail support for the H-1B visa program. Just hours before, he had dismissed a woman’s worries about her husband and other American engineers losing jobs to foreign engineers allowed into the United States under the H-1B program…

On Tuesday morning, the White House’s blog highlighted Obama’s decision to invite a Brazilian-born immigrant software engineer, Mike Krieger, to sit with the first lady during his Jan. 24 State of the Union Speech…

Krieger is in the country on a student visa because he’s enrolled at Stanford University. But he has also gained a temporary H-1B visa that allows him to stay in the county and compete against American engineers for high-tech jobs

The White House and the High-Tech sector generally tries to camouflage the swamping of these professions by touting occasional examples of entrepreneurship.  The Daily Caller journalist had the integrity to draw on CIS for perspective:

“It really does show how clueless immigration enthusiasts really are,” said Mark Krikorian, the director of the Center for Immigration Studies. “The line that companies only bring in H-1B people when they can’t find someone else to do the job is simply false.”

Each year, the government allows companies to hire 65,000 H-1B high-tech workers, including many engineers. Another 20,000 visas are given to foreigners with advanced degrees, and tens of thousands more are available under numerous other categories.

Many of the foreign-born engineers are hired as subcontractors to work in low-wage high-tech jobs for several years.

A 2008 review by Krikorian’s center of the H-1B program concluded that many American high-tech workers are replaced by cheaper H-1B immigrants, and that “wages for H-1B workers averaged $12,000 below the median wage for U.S. workers in the same occupation and location.”

Unfortunately immigration enthusiasts are not at all clueless – they are corrupt. It is a highly profitable stance, as President Obama’s current fund-raising advantage demonstrates.