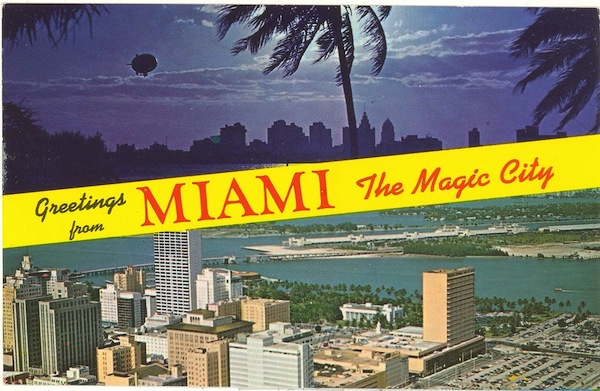 Poor Miami. It used to be a nice American city, until over a million Cuban exiles arrived who thought they could do a better job of running the place. Plus, in 1980 Castro dumped 125,000 of the worst of his criminals in the Mariel boatlift, celebrated by diversity enthusiasts as a great success as long as the outcome wasn’t inspected too closely. A police officer remarked at the time, “It was like an invading army was dropped in here to rape, pillage and burn in our town.”

As a result, Miami became a center for crime, the Spanish language and Cuban culture. Diversity has added appalling practices like the criminal slaughter of families’ horses to supply the Cubans with horsemeat. In south Florida, a dead horse is more valuable than a live one. The area is also a hotbed of Medicare fraud committed by Cubans in the billions of dollars.

Miami is thick with diversity. A recent Census community survey showed that 51.2% of the population in Miami-Dade County is foreign born. The same update revealed that a language other than English is spoken in 72.3% of households.

A recent report about the state of Miami schools shows how immigration remains an expensive project for the taxpayers. The following Miami Herald story is remarkably clear about the dollars required for importing diversity, although there is a customary mention of an illegal alien valedictorian. One eye-opener: nearly 1,000 new immigrant students enter district schools every month.

As lawmakers in Washington consider changes to immigration laws, Miami-Dade public school officials want them to know just how much their policies are taxing South Florida’s classrooms.

According to a report released last week, the district pays $22 million each year to educate new students who come to South Florida from other countries and enroll in K-12 classes. The report says close to 1,000 new immigrant students enter Miami-Dade classes on average each month — totaling about 11,000 a year — costing about $2,000 more per student than those who come from South Florida and don’t require additional language services.

The “Immigration Impact Briefing,” compiled at the request of Miami-Dade School Board member and Republican political consultant Carlos Curbelo, says the extra $22 million — a conservative estimate — is not reimbursed by federal or state funds. Translation: It comes from Miami-Dade taxpayers.

“This does come at a cost, and the way it happens isn’t in any way ideal,” Curbelo, the son of Cuban parents, said of how federal laws regulate and fund the education of immigrant students.

District figures show the melting pot in Miami-Dade filters down into the public school system, where as of February there were more than 68,000 foreign-born students enrolled in classes. That’s one out of every five students, mostly from Cuba, though students come from countries as far flung as Poland and Nigeria.

Among immigration’s effects on the district, according to the report:

• Additional English for Speakers of Other Languages courses must be offered to accommodate “English language learners,” and likewise additional teachers must be must be certified and ESOL-endorsed. The cost of ESOL, which is not reimbursed by the state or federal government, is about $1,500 a student.

• Students who come from other countries cost the district close to $500 each to provide “student stations” — a desk, classroom space — because their enrollment is unexpected.

• For some students uprooted abruptly from their schooling, the district must provide a “transitional newcomer program” that caters to cultural and language needs.

The “federal government should fully fund the cost of its immigration policies on local school districts,” the report states. The district also urges Congress to allow students of “good moral character” pursuing college or military enlistment to stay in the country.

Curbelo, who said his interest in immigration is unrelated to his mulling a run for Congress, said he asked for the report last month to document “the cost of our broken immigration system.”

But Iraida Mendez-Cartaya, assistant superintendent of intergovernmental affairs, said, “There’s a lot we can do with $22 million.”

Curbelo also said he wanted to outline the cost of educating immigrant students only to have them potentially deported, though the Obama Administration’s Deferred Action for Childhood Arrivals program has allowed students like Daniela Pelaez to stay in the country temporarily. Pelaez, a North Miami Senior High School valedictorian whose parents brought her to the United States from Colombia when she was a young child, faced deportation last year. She received a temporary reprieve through DACA. She now attends Dartmouth College, according to her attorney.

Charlene Burks, administrative director of the district’s federal and state compliance office, said most immigrant students come to South Florida under stable circumstances with their families. Some even come only for the winter and are enrolled in school for just a few weeks. But sudden influxes can happen, such as in the winter of 2010 after the major earthquake in Haiti, which sent Haitian children by the thousands into South Florida schools.

Under federal law, schools must accept all students who apply and cannot inquire about immigration status. But they do know where students were born.

The biggest challenge in educating foreign students, Burks said, is the language barrier — an issue highlighted by new school grading standards that treat English language learners as if they are proficient in English after just one year of studying the language. About one-quarter of the 70,000 students identified as English language learners each year come from another country, according to the district’s division of bilingual education and world languages.