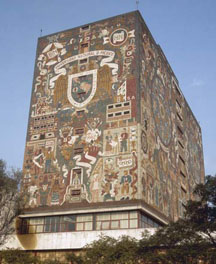 It happens all the time — illegal alien teens complain at length that state-sponsored colleges and universities in America are not cheap enough for them, and the press is happy to assist by supplying sob stories. (For an example, see For an illegal immigrant, getting into UCLA was the easy part.)

The illegal students squawk that they want cheaper in-state tuition (unavailable to citizens of other states) and often get it, even though the foreigners cannot work legally upon graduation.

But Mexico (the top sender of illegal aliens) has advanced far beyond stone tools, and it has perfectly fine universities that its citizens abroad could attend. Many of these students want to speak Spanish (because they cannot speak English) as well as celebrate Hispanic culture — what could be more wonderful than returning to their home society where they can immerse themselves totally in Raza-ness. Win win.

There is excellent higher education available in Mexico, as indicated by the National Autonomous University (pictured) recently being recognized for its excellence [Mexican university wins Spanish award, Google AP, June 10, 2009].

MADRID (AP) – A nearly 100-year-old Mexican university was awarded Spain's Prince of Asturias Award for Communication and Humanities on Wednesday in recognition of its role in providing Latin America with outstanding intellectuals and scientists.

The National Autonomous University of Mexico, which has nearly 300,000 students and more than 34,000 professors and researchers, had received more than 1,500 letters of support for the award, including ones from world famous authors Carlos Fuentes and Gabriel Garcia Marquez, the award foundation said.

The university, founded in 1910, "has become a point of reference, combining quality and an extensive academic and research offering with its firm commitment to disseminate culture, humanism and new technologies," the foundation said.

It also praised the school for the role it played as "a reception center for intellectuals and professors exiled (from Spain) after the (1936-39) Spanish Civil War."

The university is one of the most important public centers for higher education in Mexico and Latin America, with alumni including three Nobel Prize winners – the late Octavio Paz for literature (1990), chemistry scientist Mario Molina (1995), and the late diplomat Alfonso Garcia Robles for the Peace Prize in 1982, the foundation said.

In 2007, the university's main campus in Mexico City, the University City, was named a World Heritage site by UNESCO, which praised it as a monumental example of the modernism of the 20th century.

Incidentally, California is projected to have spent spend $11,935 per pupil in 2007-08 for K-12 education, so foreign children have already gotten plenty from state taxpayers.