How curious that the dinosaur media chirped cheerfully about the Mexican Presidente’s upcoming visit to Arlington Cemetery, but did little reporting following the actual deed.

When Mexican President Felipe Calder??n pays his respects at Arlington National Cemetery this week, it will be more than a rote diplomatic gesture. He will be signaling the closure of a wound that dates from a 1914 U.S. military occupation – and the vast improvement in U.S.-Mexico relations in recent years.

Mexican officials say Calder??n will be the first Mexican president to lay a wreath at the Tomb of the Unknown Soldier. Previous leaders resisted the move, they said, because the cemetery includes the graves of U.S. Marines who took part in the 1914 seizure of the port of Veracruz. Though largely forgotten by Americans, it was one of several U.S. military interventions in Mexico that shaped that country’s longtime wariness toward its northern neighbor.

The trip to Arlington ”is a symbol of a much more modern relationship between both our countries,” said Mexican Ambassador Arturo Sarukhan. ”More importantly, it is also a recognition of the role Mexican Americans and Latinos in general are playing in the armed forces of the United States.”

Perhaps the Presidente’s anti-American speech to Congress was so pleasing to liberal scribblers’ ears that they couldn’t imagine reporting anything in addition.

Follow-up articles were rare and short on details, although long on attitude, such as the following:

During his state visit, Mexican President Felipe Calderon is taking time to recognize a unique group of Mexican-Americans.

Calderon’s visit Arlington National Cemetery is one of many stops he will make during his time with US President Barack Obama. […]

Calderon will be the first Mexican president in US history to lay a wreath on the tomb of the unknown soldier at Arlington. Analysts say the act shows the Mexican president honoring the the sacrifices Latino families have made for American wars in Iraq and Afghanistan.

Calderon visited Arlington National Cemetery supposedly to ”honor” Americans but the ceremony is treated as being all about Mexicans, like our military couldn’t get along without them.

When the Mexican fifth column isn’t demanding open borders, they are inaccurately depicting Hispanics as being a vital part of America’s armed forces throughout military history, which they most certainly were not.

About 300,000 Mexican-Americans did serve in WWII, not a huge number considering 16 million citizens went to war – that’s 1.8 percent.

So with that background and recent outrages in mind, should American veterans and currently serving members of the armed forces feel honored by Calderon’s laying a wreath at the Tomb of the Unknowns?

As a citizen, I find it infuriating that America’s hallowed ground was used to score some post-national political points with a decidedly unfriendly neighbor. It’s not uncommon for official visitors from foreign governments to place a wreath at Arlington, but Calderon is a special case. He could have shown respect for the sacrifices Americans have made to defeat Nazis and Communism, but there’s no indication of anything so generous. As always, Calderon works for the Mexican tribe alone, which would be acceptable if he didn’t insult Americans in every way possible to do it. 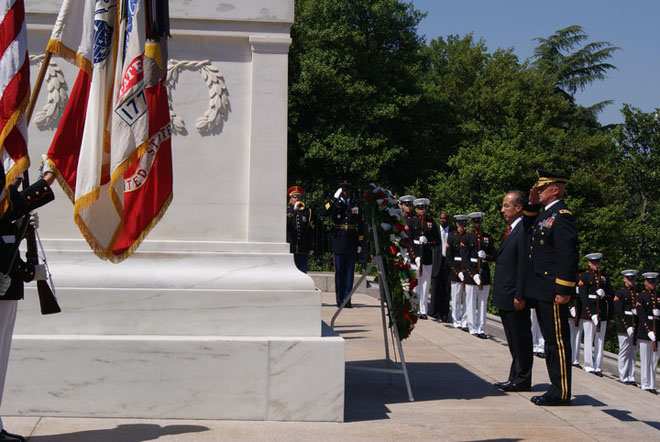