In San Francisco, Diverse Cheaters Get a Free Ride

San Francisco is facing a budget deficit of $483 million in the next fiscal year, so it has been trying to tighten up on the many fare cheats who ride the city’s buses without paying.

For the last little while, authorities for Muni (aka Municipal Transportation Agency) sent around groups of officers to ticket the scofflaws before they could jump off the bus. It worked very well until the diversity whiners got involved.

Here’s what happened: Last year Muni started a new effort to get people to actually pay to ride its buses and trains. The most effective way it found to do this was ”saturation enforcement.” That meant putting about 15 uniformed officers in one spot at a time to bust fare evaders. (When there are fewer ticket-writing inspectors, they are simply outnumbered by scofflaws, who simply walk away scot-free.) Even though the policy was effective — fare evasion has gone down significantly since they started — Muni said it would abandon the saturations and go back to putting a couple inspectors at a time in each spot. Why? …

… Because of complaints to San Francisco’s Immigrant Rights Commission.

People were worried that inspectors were demanding proof of payment from riders who didn’t speak English, evoking the image of officers badgering the old Chinese man who simply can’t understand what he is supposed to do. But ironically, the saturations actually decrease the possibility of this kind of cultural misunderstanding. With that many officers in one spot there will always be one who can speak your language. When I was on the Muni platform, I heard several inspectors speaking fluently in Spanish and Cantonese.

In the sanctuary city of San Francisco, catering to every whim of immigrants and illegal aliens is the top priority, above everything else, including public safety and balancing the budget. Another example, San Francisco Won’t Impound Cars Of Unlicensed Drivers Because They Might Be Illegals!. Seriously, it is hard to keep up.

Below, city transportation in 1906, before the common diesel bus used today. 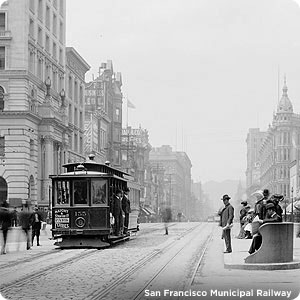