Mexico remains the top country where kidnapping occurs, where it has long been a part of the nation’s crime culture. A survey from Control Risks reported that in 2013 Mexico was numero uno in kidnap for ransom in absolute terms.

These days however, Mexican kidnappers are downsizing from snatching children of wealthy parents to working class people. 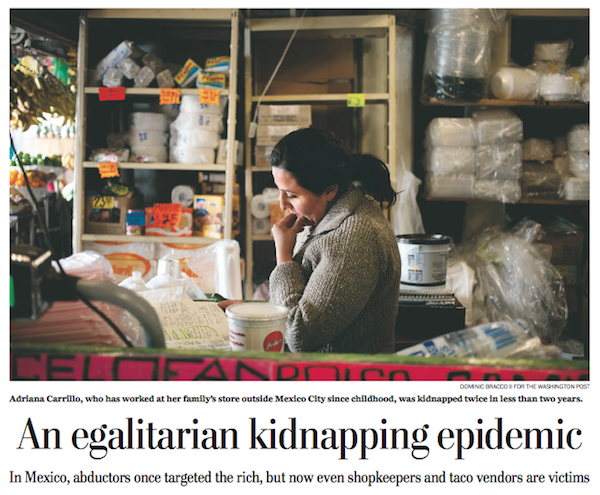 Like other elements of Mexican culture, kidnapping has migrated north just like enchiladas. In 2007, 13-year-old Clay Moore was taken from a Florida school bus stop by an illegal alien with a gun, but the boy managed to escape. In 2008 it was reported that Americans have been kidnapped by Mexican drug gangs in Texas and held for ransom in Mexico.

Kidnap for ransom was a crime rarely committed in the United States because the penalties have been traditionally harsh. Caryl Chessman was executed in 1960 for a violent kidnap in which nobody died, although it’s a sure thing that punishment would never happen today. But now, kidnapping is back, because of immigration.

When wealthy Mexican take up residence in the US, ransom kidnappings tick upward, as has happened in San Diego and Phoenix.

America has been foolish to allow so many Mexicans to reside permanently in the US, given their fondness for crime in addition to their stubborn misogyny, disdain for scholarly pursuits and refusal to embrace patriotic assimilation.

Kidnappings in Mexico surge to the highest number on record, Washington Post, August 15, 2014

ECATEPEC, MEXICO — The first time, after the men with police badges had lashed Adriana Carrillo’s wrists and ankles with tape, and she had spent 37 hours in the back of a Nissan, her father tossed the $12,000 ransom in a black satchel over a graffiti-strewn brick wall and brought her nightmare to its conclusion. She took three days off and then went back to work.

Carrillo returned to the cash register of the family store, where she had worked since she was 8 with her parents and six sisters, amid the floor-to-ceiling jumble of marshmallows and mixed nuts and pinwheel pasta and Styrofoam cups. Their business — cash-based, working-class, on the outskirts of Mexico City — happened to put them squarely into the demographic most vulnerable to Mexico’s kidnapping epidemic. And on May 28, 2013, less than two years later, a white sedan pulled up alongside Carrillo’s car as she drove home late from the market. When she saw the guns, she covered her face with her hands.

In Mexico, with its history of drug-war violence and corrupt police, kidnapping is an old story. In the past, the crime tended to target the rich. Now it has become more egalitarian. Victims these days are often shopkeepers, taxi drivers, service employees, parking attendants and taco vendors who often work in cash or in Mexico’s “informal” economy. Targets also tend to be young — students, with parents willing to pay ransoms, are commonly targeted.

“The phenomenon has changed. Now it’s the workers, the people in the informal economy, because they are the ones who have access to money quickly,” said Isabel Miranda de Wallace, an anti-kidnapping activist in Mexico. “We have never seen as many kidnappings as we are seeing now.”

Last year, Mexico officially recorded 1,698 kidnappings, the highest number on record. Yet government officials concede that only a small percentage of victims — one in 10 by some estimates — report the crime, as police are sometimes involved in kidnappings and not trusted. The statistics kept by Miranda’s organization, Association to Stop Kidnapping (Asociacion Alto al Secuestro) , recorded 3,038 kidnappings last year. Another, led by Fernando Ruiz Canales, a former kidnapping victim who now helps negotiate for the release of hostages, puts last year’s kidnapping total at 27,740, or 76 per day. END_OF_DOCUMENT_TOKEN_TO_BE_REPLACED