If demanding DREAMer kids knew how deluxe and inexpensive Mexico’s higher education system is, many might chose a full-tilt raza education with 24/7 Spanish and Mexican culture. (See my 2009 blog, Mexico’s National University Wins Prestigious Award.) For example, at the National Polytechnic Institute, 60 percent of students pay only $12 per semester.

Now we learn from Mexico that it is cranking out lots of engineering grads to build the country’s infrastructure and economy.

When Mexico’s Presidente Calderon visits Washington demanding handouts and open borders from Uncle Sucker, he pretends to be the poor neighbor with lots of needs. In fact, Mexico is a middle-class country and Americans should recognize that fact and expect more responsibility.

The good news is that Mexico is promoting a more educated workforce. The bad news is a lack of jobs there for engineers—does Mexico plan on exporting them to the United States?

Another problem is the lack of an entrepreneurial culture. When Mexico was admitted to NAFTA, business owners were clueless about the need to reinvest in their own companies and instead paid themselves extravagant salaries.

Below, a group of engineering students huddle with a professor at Mexico’s National Polytechnic Institute. 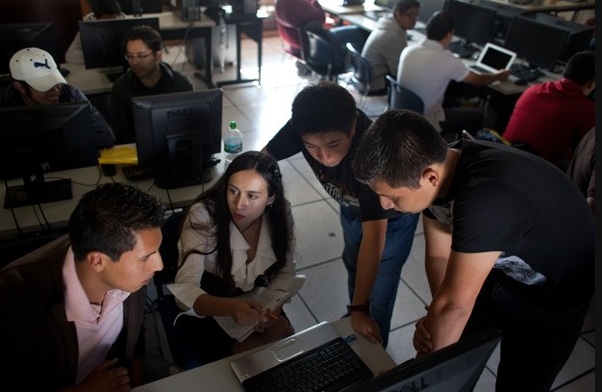 Mexico is now a top producer of engineers, but where are jobs?, Washington Post, October 28, 2012

MEXICO CITY — In an aggressive bid to move beyond low-wage factory jobs and toward an entrepreneurial economy, Mexico is producing graduates in engineering and technology at rates that challenge its international rivals, including its No. 1 trade partner, the United States.

President Felipe Calderon last month boasted that Mexico graduates 130,000 engineers and technicians a year from universities and specialized high schools, more than Canada, Germany or even Brazil, which has nearly twice the population of Mexico.

But it remains an open question whether the soaring number of skilled graduates will transform Mexico into the “country of engineers” that Calderon envisions, or they go to work in low-level managerial jobs at assembly plants owned by foreigners — jobs that have come to define their profession here.

“This idea that Mexico is a country of engineers is a mirage,” said Manuel Gil Anton, an expert in education policy at the College of Mexico.

Gil compared Mexico to a Starbucks franchise — its workers are able to deliver a fast cup of coffee but cannot create by themselves the business model and products that make Starbucks a global brand. He said most engineers in Mexico become underachievers, not inventors or entrepreneurs. “They turn knobs,” he said.

But this may change as more engineers graduate and if incoming President Enrique Peña Nieto can make good on his promise to remove impediments to growth and turn Mexico into a kind of warm-weather Canada.

Many analysts who study emerging economies — such as the MISTs (as Mexico, Indonesia, South Korea and Turkey are known) — say that Mexico is, in fact, laying the groundwork.

Mexico already posts a trade surplus with the United States and is building communications satellites and corporate jets.

A boom in higher education
In the past decade, Mexico has doubled the number of its public two-year colleges and four-year universities.

During Calderon’s six years in office, even as the drug war raged and the recession pushed millions of Mexicans into poverty, the government built 140 schools of higher learning, with 120 of them dedicated to science and engineering. Capacity was expanded at 96 other public campuses.

Private colleges — such as the pricey but popular Monterrey Institute of Technology with its 31 campuses in 25 cities — are experiencing a boom.

“Mexico is now one of the top producers of engineers in the world,” said Oscar Suchil, director of graduate affairs at the public National Polytechnic Institute, where 60 percent of its 163,000 students are studying engineering and paying just $12 a semester in tuition.

These aspirational students, many from humble backgrounds, want desperately to build something — for themselves and their country — and join Mexico’s growing middle class, which accounts for half of the population.

In a courtyard of the engineering library at the National Polytechnic Institute here sat a slightly stressed Alejandro Landin Cruz, 20, surrounded by graph paper scrawled with logarithms, the keypad of his Casio scientific calculator worn down by his flying fingertips.

Landin was cramming for his applied-statistics exam, which he predicted he would ace. “I really like math,” he said.

Like most of his classmates, Landin comes from a working-class family. He pays a pittance to attend what many here proudly call “the MIT of Mexico,” whose mascot is a white burro.

Under Calderon, the number of college scholarships doubled. The government gives Landin $65 a month — which helps him pay for bus fare, clothes, school supplies and food.

His dream is to be a transport engineer and calculate the weight and placement of cargo containers on ships for the Mexican customs agency.

“I feel like we can reach the same level as anyone in the world, because this is a seriously competitive school,” he said. “I can promise you my classes are not easy.”

Mexico is now competing with the United States in the number of undergraduate degrees in engineering.

“I would tell American companies to come to Mexico, because our engineers are very good. But don’t give us jobs as technicians; give us jobs as creators,” said Emelyn Medina, 22, a student of mechanical engineering at the National Polytechnic Institute who remembers dismantling her family’s TV remote controls as a child to see how they worked.

The basics
While Mexico has become a top producer of raw engineering talent, the country lags far behind its competitors — including South Korea and Chile — in basic measures of innovation, such as the number of patents filed, scientific papers published and investments made in research and development.

Public and private spending on research and development in Mexico, as a percentage of gross domestic product, is at the very bottom among industrial nations.

But university enrollment in Mexico has tripled in 30 years, to almost 3 million students.

Ruben Bravo, 23, who is majoring in mechanical engineering at the National Polytechnic Institute, is president of the club that competes in the international intercollegiate RoboGames. This year, Mexico finished in second place, besting South Korea and Japan but losing to the United States.

“But we’re ambitious, and every year we win more medals,” said Bravo, who wants to start his own robotics company in Mexico, where, he pointed out, most of the cars sold in the United States are made.

Peña Nieto has pledged to enroll half of all college-age Mexicans in higher education, up from less than 30 percent today, which is one of the lowest figures in developed Latin American countries.

“We’ve combined an aggressive government-sponsored production of engineers with no clear plan to put them to work,” said Roberto Rodriquez Gomez, a sociologist who studies education policy at the Autonomous National University of Mexico.

“The problem is that many companies in Mexico don’t want to hire an engineer who innovates; they want to hire a technician,” said Jorge Alcantara, 22, who commutes two hours each way to the National Polytechnic Institute.

He is the first in his family to attend a university.

Economists who study Mexico point out that innovation requires investment and that investment is stoked by competition. Mexico suffers from a political culture reluctant to challenge the comfortable elites who own the nation’s near-monopoly enterprises and the government bureaucracy that serves them.

“Mexico has to invest in Mexico,” said Alcantara, who is one semester shy of a degree in computer engineering.

“We Mexicans have to lose our fear of everything, of math, of science, which is the only way to create innovation and for us to grow up as a country.”