Many Christmas traditions are imports from other countries, and there's nothing wrong with that. The Christmas tree originated in Germany and Santa Claus has a distant history beginning as St. Nicholas in 4th century Turkey. Those customs have become part of America's celebrations, all to the good.

However, when illegal alien Mexicans use their custom of the posadas to compare their lawbreaking with the experiences of Joseph and Mary, that's over the line. As Sister Elisa Ruiz remarked in a 2006 San Francisco Chronicle article (Tenderloin turning into new Latino neighborhood), "They really identify themselves with Jose and Maria, the idea of being immigrants in a land that's not your own."

That's not a celebration of Christmas; it's cultural rationalization for invasion.

The posadas ritual is a re-enactment of the Christmas story of Joseph and Mary's search for lodging where the baby Jesus could be born and is popular among Mexicans residing in the United States. 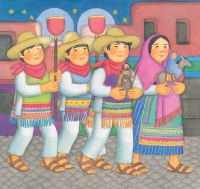 Las Posadas dates to the 1500s, when Christian evangelists seeking to convert indigenous people of Mexico realized they could teach them their faith through the re-enactment of biblical stories.

"One of the deep meanings of the Posadas is the struggle of the immigrant," said Timothy Matovina, a theologian and professor at the University of Notre Dame. Mexican immigrants can see their own stories reflected in the biblical pilgrims' journey, he said. [Oklahoma City parishioners find joy in Las Posadas: Ritual Has Parallels with Immigrants' Plight, The Oklahoman, Oklahoma City, Dec 23, 2008]

"Each night we try to leave people with a message, one that focuses on our reality here as immigrants today," [Sister Josefa] Gonzalez said in Spanish. "We speak of how to keep hope alive for the coming arrival of Jesus, and that hope translates into an idea that maybe tomorrow things will get better, and that we've left our countries in search of a better life, and must be an example to others."

In Vallejo, California, one booster of the posadas had a financial incentive against assimilation: Hispanic community keeping culture alive.

"We wanted to go ahead and make sure the culture of our countries is kept here in the United States," said Mina Diaz, co-owner of Diaz & Loera Centro Latino, which provides packing and shipping, employment and immigration services.

Mooching legal status is never far from the thoughts of some: A Hispanic spiritual journey [Richmond Times Dispatch].

Though the Posada is a tradition that reminds people of home, some also see the story of Joseph and Mary seeking shelter as applying to their immigrant status.

One woman from El Salvador who came to Monday's Posada with a young child asked during a prayer time for Mary and Joseph to intercede on her behalf in her effort to gain permission to stay in the United States.

"We are asking that they let us into this country so we can help our families in our country," she said.

In southern Caifornia, the posadas celebration was specifically utilized as an open-borders propaganda device: Posada celebration to incorporate border protest.

When U.S. posada participants get to the fence (symbolic of the manger where Jesus was born), they will meet up with people from the Mexico side of the border who will have engaged in their own posada proceeding north to the border.

The border fence symbolizes Jesus' manger? Those Mexicans are certainly imaginative in their way!