Mexicans Love Jesus Art (Particularly When It's Made of Cocaine)

Mexicans are so darn inventive when it comes to smuggling. They have stuck a girl in a pinata, crammed a woman into a dashboard and encased a man in a car seat. Is there anything they won't do to smuggle people and drugs into America? 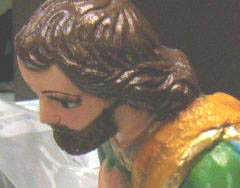 Of course not—they're Mexicans! Crime (organized and otherwise) is powerful in Mexico. When the government battles the drug cartels, the government loses.

The latest colorful border seizure is a statue of Jesus made out of cocaine...

Drug traffickers mixed as much as six pounds of the illicit white powder into a paste and used it to make a regal statue of the Christian savior, complete with painted-on flowing hair and a gold cape.

Smugglers were likely hoping the statue, which could be worth as much as $30,000 on the streets, would be dismissed by border guards as just another of the hundreds of plaster representations hawked to borderland tourists.

But a dog trained to sniff out drugs confirmed it was anything but another religious memento. [Drug dealer's wait for Jesus denied by federal agents, Houston Chronicle, May 29, 2008]

The occasion is a perfect time for an update of the popular song, Plastic Jesus.

I don't care if it rains or freezes, 'Long as I got my Cocaine Jesus Riding in the trunk space of my car. Across the border into Texas I'll be buying a brand new Lexus. With my Cocaine Jesus I'll go far.