Mexican Teachers Strike for Right to Sell and Bequeath Their Jobs

As I have written on many occasions, Mexico's progress-averse culture (as described by Prof Lawrence Harrison) makes Mexicans some of the worst immigrants on earth because of the incompatibility of their values with ours. Mexicans' disdain for education runs deep and lasts for generations, even when they reside in America.

In Mexico, kiddies bribe teachers for better grades — a cynicism made a little more understandable by a recent news report: For Mexico's teachers, jobs are things to inherit or sell, and they're on strike to keep it that way [Houston Chronicle, October 12, 2008].

"We're fighting to guarantee jobs for our kids," Oscar Miranda said as he helped teachers stage a protest in front of the governor's office in Cuernavaca, the capital of Morelos.

"Throughout history," Miranda said, "the sons of carpenters have become carpenters. Even politicians' children become politicians. Why shouldn't our children have the same right?"

Gordillo and Calderon have denied the teachers' accusations. Instead, they say Mexico urgently needs to overhaul its education system.

The plan would require teaching applicants to take government-administered exams before hiring or promotion. Pay raises would be linked to students' performance on standardized tests. The details are being negotiated in the states, which will administer the project. Most have pledged their support of its general outlines.

In other coverage of the strike, Britain's Daily Mail reported, Meet the teachers with a major discipline problem...

Next time these teachers ask their pupils to behave, they might find this picture returns to haunt them.

This protest erupted yesterday in the state of Morelos, south of Mexico City, when thousands of striking teachers clashed with riot police. 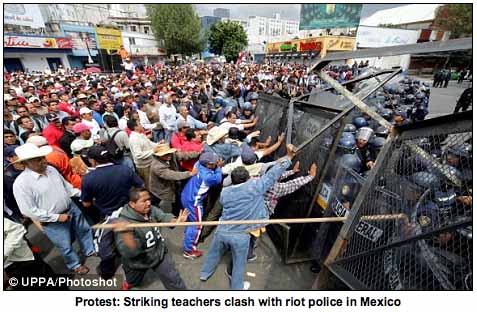 The Daily Mail apparently has higher expectations of Mexican teachers than is warranted by their previous behavior.

No kidding. Mexicans' anti-assimilation attitude persists because they are only here for the MONEY; they despise our traditional culture (calling it "Anglo-Protestant" like that was a bad thing) and polling shows the majority of Mexicans regard Americans as racist and corrupt.

They hate America. We shouldn't be surprised that their only desire is to receive their paychecks under the table, and they don't want to join the national community.

By 2050, the number of Hispanics in America will be triple what it was in 2005, jumping from 14 percent to 29 percent of the U.S. population, according to the Pew Hispanic Center of Washington, D.C., which studies the growth of America's Latino population.

The numbers are even higher in Texas, where Hispanics already make up more than a third of the population.

The large influx allows Hispanics to hold onto their culture and language longer than the last great wave of immigrants did a century ago, experts say.

How many more millions of these unfriendlies can America stand?