Mexican Experts Opine That the Trump Fence Is Hoppable

On Tuesday, the Washington Post front-paged its criticism of President Trump’s border wall, quoting Mexican touts saying they are unimpressed with the prototypes. Now it’s true that Mexicans are acknowledged experts in national breaking and entering, but there is more to keeping out moochers and enemies that the story leaves unmentioned — like universal e-Verify to end the jobs magnet. 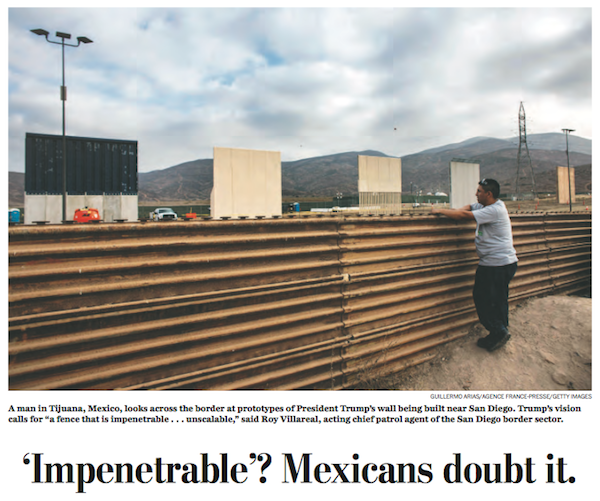 Still, I appreciated the quote from the insightful anonymous police officer: “What insults me is the government of Mexico, which doesn’t care about its own people. This is an insult. The money being robbed that they are not spending on schools, on science.”

Yes, indeed. Mexico is rich, consistently ranking around #15 in World GDP, so it could easily afford to provide better for its people.

A border wall is needed to block invasive jihadists, who won’t be stopped by universal e-Verify. Remember when filmmaker James O’Keefe crossed the border dressed as Osama bin Laden to illustrate the danger of open borders, shown below. 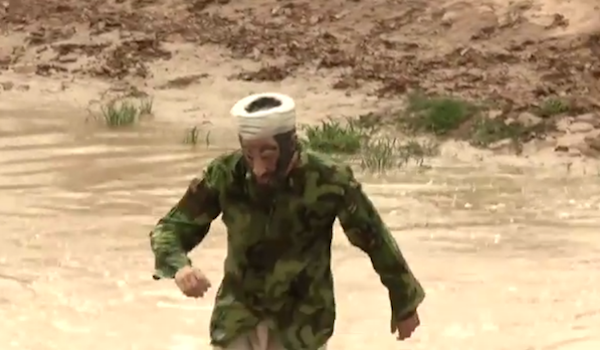 (Washington Post) SAN DIEGO — The prototypes of the Trump border wall are taking shape this month in a sun-baked swath of scrubland abutting a run-down neighborhood of Tijuana. Lined up next to each other, the 30-foot-tall concrete and steel sample barriers – some with extra-stout reinforced bases, others topped with metal spikes – certainly look ominous.

The requirements established to realize President Donald Trump’s vision call for “a fence that is impenetrable, it’s unscalable,” said Roy Villareal, acting chief patrol agent of the San Diego border sector. “They can’t dig under it. They can’t cut through it.”

Even these big warning slabs of concrete, the teeming construction site, and police and helicopters patrolling both sides of the border weren’t enough to stop a half-dozen would-be migrants from hopping the existing fence earlier this month and landing smack in the middle of the project, according to U.S. border officials.

Maybe the fence-hoppers were unlucky, or had chosen an ill-advised, hide-in-plain-sight strategy, but either way their experience is suggestive of how many Mexicans feel about Trump’s wall: no matter how it’s built, it’s not going to work.

“People are still going to cross no matter what is there,” said Kevin Avila Rodriguez, 17, who recycles trash and lives near the spot where the border wall prototypes are being built. “This won’t change things much.”

Most of the Mexican reaction to these prototypes ranges from offended to blasé. Residents of Tijuana and other border cities have lived with various types of American barriers for years, and they are used to them. The existing fence here, built in the mid-1990s, is roughly 10 feet tall and made out of metal sheets from helicopter landing pads left over from the Vietnam War. A second layer of more modern steel-mesh fence, 14 to 18 feet tall, stands behind that.