Some of the automation applied to the lodging industry has been gimmicky to get easy press attention, like the dinosaur robot check-in clerk in a Japanese hotel.

However, basic wheeled robots that deliver items to rooms seem about to expand with the $15 million invested in the Savioke company of Silicon Valley.

A human employee loads up the extra towels or toothbrush the customer wants, and the robot takes it to the correct room without running into any walls or people. Hotel managers have to love the technology that is available 24/7 and doesn’t require a paycheck. 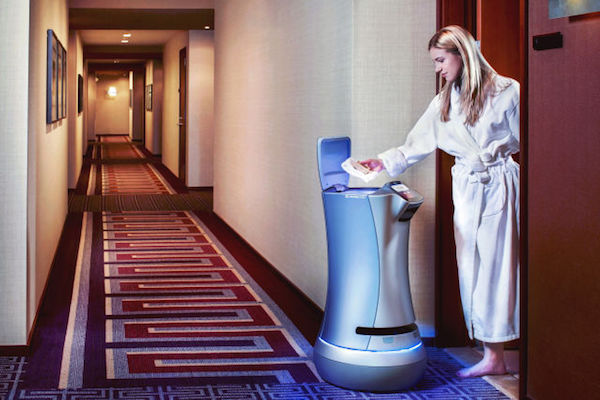 The Bureau of Labor Statistics counts bellhops together with baggage porters, toting up 44,170 in May 2014. So it’s unclear how many room service jobs will be lost in the long run — likely tens of thousands in this case — but the important thing is the way technological unemployment gradually adds up to get a shrinking unemployment universe. The process has been incremental, but is speeding up now as the machines get smarter, and there’s no end in sight.

Like phone operator, bellhop has been a job that doesn’t require a lot of education. Since 70 percent of Americans do not have a four-year college degree, the loss of millions of these basic jobs has been devastating in communities already battered by outsourcing, and automation is partially responsible for the jobless recovery we are experiencing.

America certainly doesn’t need to import immigrants to be hotel workers or anything else for that matter. The alleged “jobs Americans won’t do” will be done by smart machines.

Your hotel’s newest bellhop may be a robot.

A Santa Clara, Calif., start-up and its “autonomous robot helpers” received $15 million in new financing last month. Savioke’s goal is to put robots in hotels across the country, building on its current stable of 12, including one near Los Angeles International Airport.

“We have lots of robots that are ready to go,” Savioke co-founder Tessa Lau said.

The 100-pound, 3-foot-tall Savioke robot, dubbed Relay, is built primarily to deliver extra towels, toothpaste or other necessities to guest rooms. The hotel staff punches in a room number on the robot’s touch screen and Relay rolls into the elevator and up to the designated room.

The robot doesn’t have arms and can communicate with guests only through typed messages that appear on its display screen. It uses Wi-Fi and 3-D cameras to navigate around the hotel.

The machines are probably the most “Jetsons”-like facet of the hospitality industry’s efforts to up its automation game.

Most new hotels have installed temperature control systems that shut off the heating and cooling when guest rooms are empty. A few hotels put computer tablets in the rooms that guests can use to order room service, request a taxi or close the blinds.

Major hotel operators such as Marriott International have created smartphone apps to let guests check in using their mobile devices. Hilton Worldwide now lets guests use their smartphones to open their hotel room doors in 112 hotels and plans to add the technology to its newest brand, Tru, which launches later this year.

Near Nagasaki, Japan, a hotel linked to a nearby amusement park is staffed entirely by robots. The guest room doors open using face-recognition software.

Still, hospitality industry experts disagree on how much automation U.S. hotel owners will accept, especially at high-end locations where guests expect staff to serve them with tailored attention and practiced obsequiousness.

“With robots, you don’t get personalized service,” said Steve Choe, general manager of the InterContinental Los Angeles Century City, a luxury hotel with 361 rooms, including 151 suites. “Those are the touches people still want.”

That may be true of most high-end hotels, said Lynn Mohrfeld, president of the California Hotel and Lodging Assn. But he suggested that robots would be popular at hotels that cater to millennials with a fascination for high-tech gadgets.

“In a four-star hotel in Silicon Valley, this would be a nice novelty,” he said.

Although Relay is primarily a novelty designed to attract tech-happy guests, hotel owners and managers say they are pursuing other automation technology to cut down on the industry’s two biggest expenses: staffing and energy costs.

Phone apps and kiosks that let guests check in faster free up front desk staff to attend to other guest needs, while technology that shuts down air-conditioning units when rooms are empty can save on expensive energy costs.

Savioke received its latest infusion of capital from Intel Capital, EDBI, the corporate investment arm of the Singapore Economic Development Board and Northern Light Venture Capital. The seed money for the company came from Google Ventures, the investment arm of the search engine giant, and a venture capital group led by former Yahoo executives, among others.

Hotels that order the robot pay Savioke a monthly fee that includes maintenance. The company declined to disclose the leasing fee.

At the Residence Inn by Marriott on Century Boulevard, the robot has been rolling the halls for a few months and was recently upgraded to deliver orders for Starbucks coffee.

Although the robot’s factory name is Relay, each hotel has given its machine a unique moniker. At the Residence Inn, they call it Wally. Other hotels have dubbed it Dash and Botlr.

The robot, shaped like a giant flower vase, contains an enclosed compartment where hotel staff can put drinks, snacks or other items that guests order from the front desk. Toothpaste makes the trip most often.

When the machine isn’t in use, it can navigate back to the front desk to recharge its batteries.

Residence Inn General Manager Tom Beedon said the robot has been a big hit with guests, particularly young visitors who order things from the front desk just so they can post pictures of Wally on social media. (In lieu of tips, the robot asks for mentions on Twitter.)

“The feedback on social media has been over the top,” Beedon said.

On the Yelp review site, a guest who visited in October from Austin said: “Oh, my goodness, I just have to start by gushing over Wally; I am completely enamored with that little guy!”

The robot isn’t expected to take jobs away from human employees, Beedon said. Instead, it is more likely to free up front desk staff to do more complicated hotel chores, he said.

There are drawbacks to a delivery robot. After Wally brought fresh towels to a room a few weeks ago, the guest dumped his used, wet towels into the robot’s compartment. Wally promptly short-circuited.

“That was a sad day,” Beedon said. “It was like having an injured employee.”

After the robot was repaired, the general manager made a suggestion to Savioke: “They have to find a way to make that thing waterproof.”

Savioke is working on a fix, Lau said.

“The idea that someone would put wet towels in it never crossed our minds,” she said.