The Mexican crime syndicates may be murderous thugs but they didn’t make billions of dollars by being stupid about business. When they saw the market changing in their area of operations because of America’s weakened border enforcement, they decided to adjust their strategy accordingly.

The cartels saw Obama’s amnesty chatter as creating a potential for profit and promoted their kid-carry business as a result. 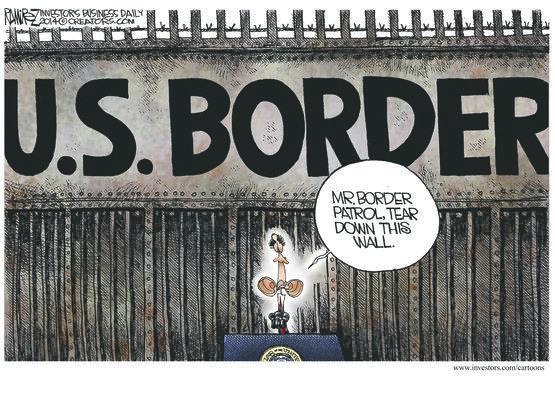 Unfortunately for America, the cartels’ increased emphasis on people smuggling makes the terrorism threat more concerning, since ISIS has $2 billion in cash. The price tag on transporting a Central American to the US runs from $5,000 to $10,000 these days. Obviously a dangerous fellow or group from the Middle East, perhaps carrying a WMD, could be made to pay far more.

The major cartels may realize that a major terrorist attack and resulting crackdown might be bad for their business overall, but all it would take is one small group of Mexicans to help smuggle jihadists across the border.

For some cartels, human smuggling has taken priority over drugs,

EL PASO — With recent waves of Central Americans seeking to reach the U.S., human smuggling along the Texas border has, at least for the moment, become more lucrative than smuggling illicit drugs for criminal organizations such as the Gulf and Zetas cartels, according to two U.S. intelligence officials.

U.S. agents tracking the money flow as part of the anti-smuggling Operation Coyote say that in just over six months, human smuggling has generated nearly $50 million, mostly in the area around the Mexican border city of Reynosa. The revenue has helped sustain the Gulf cartel during a bloody internal split, the officials said. Some factions of the Gulf cartel are now working with the Sinaloa cartel, they said, and another faction has joined forces with the Zetas, increasing violence and making the situation along the border more perilous.

“I’m not suggesting that the cartels have abandoned their drug-smuggling activities,” said Oscar Hagelsieb, assistant special agent-in-charge of Homeland Security Investigations in El Paso. “But with all the money to be made in human smuggling, they clamped their claws into it as well. Big time.

“Without a doubt, there are Gulf cartel links. We’ve been able to trace millions of dollars going into the Reynosa area. You cannot operate a criminal venture of that magnitude without the cartels having a major role in it.”

He said that U.S. authorities have identified “key operatives” of other cartels in the region “that are now heavily involved in alien smuggling.”

The smuggling operations could increase even more following recent steps by the Mexican government to stem the flow of would-be immigrants by blocking them from hitching rides on freight trains. The government said it plans to increase the speed of the trains, known collectively as “The Beast,” or La Bestia, and to monitor the trains via satellite cameras

The government said the moves are part of an effort to discourage Central Americans from using the train because of the dangers they pose. Over the years, many have been killed or maimed by falling under the wheels of the trains, or have been targeted by criminals.

A U.S. intelligence agent, who spoke on the condition of anonymity, said he expected the new obstacles to force more migrants to hire smugglers. A typical smuggler’s fee for getting a Central American to a U.S. destination has already risen from an average of $6,000 to more than $8,000, the agent said.

“Everyone wants to make them disappear, snap their fingers and push them away,” said Rubén Figueroa, an immigrant activist at a migrant shelter in Tenosique, in Mexico’s southern Tabasco state. “But no one is dealing with the root of the problem, which is violence and poverty. No one is talking about solving the problem by generating jobs and providing security. Now they want to push them deeper into the shadows.”

William Lorenzo Fernández, a Honduran selling candy and begging for tips in Mexico City to raise money to reach Texas “by foot, if I have to,” challenged the idea that the government was looking out for the safety of migrants.

“This isn’t because of the government’s concern for us, but because the Americans are pressuring them,” he said. “Tell the truth.”

U.S. officials, including Hagelsieb, expect another surge of Central Americans this fall after temperatures cool and the media spotlight fades.

Since October of last year, at least 63,000 unauthorized immigrant juveniles have been detained at the border.

Since the mid-2000s, authorities have seen Mexican cartels expand their activities from mostly drug smuggling to other operations, including counterfeiting goods, kidnapping, extortion and human smuggling. Tensions have risen with the recent cartel infighting, authorities said, with gunfights in border cities like Reynosa, where many Central Americans arrive aboard The Beast.

Guadalupe Correa-Cabrera, associate professor and chairwoman of the government department at the University of Texas at Brownsville, doesn’t discount the possibility that new groups will get involved in the business of smuggling, which she said has “become much more profitable,” she said.

Operation Coyote is aimed at taking down human smuggling operations by targeting the money. Recently, Secretary of Homeland Security Jeh Johnson announced that 363 smugglers and their associates had been arrested and more than $800,000 in illicit payments seized. One of the smugglers arrested was single-handedly responsible for luring “a vast number” of Central Americans, U.S. officials said. They declined to provide more details, citing ongoing investigations.