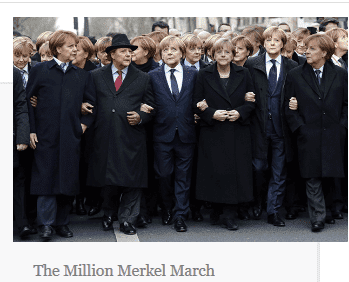 From the Sunday Times:

Angela Merkel was poised to close the German border to hundreds of thousands of migrants and refugees at the height of the migrant crisis in September 2015 — but pulled back at the last moment because she feared the resulting clashes with police would look bad on television.

A book published this week claims the German leader was warned by aides that 40,000 migrants were moving from the Balkans through Austria towards Bavaria and could enter her country within a single weekend.

“We are on a plane that has run out of fuel — and we don’t know what to do,” said one top security official.

After the warning, Ms Merkel explicitly endorsed a set of special measures during a telephone conference with Thomas de Maiziere, the interior minister, and other top officials, to seal the border.

Thousands of police were then secretly deployed by bus and helicopter to the Austrian border to stem the influx. German media learnt of the deployment but agreed to a reporting blackout for security reasons.

Then, however, Mr de Maiziere approached Dieter Romann, Germany’s most senior policeman, with two questions on behalf of the chancellor.

“Can we live with the images that will come out of this?” Mr de Maiziere demanded, according to the book by Robin Alexander, a leading German political journalist. “What happens if 500 refugees with children in their arms run towards the border guards?”

An exasperated Mr Romann replied that the appropriate course of action would be decided by the police commanders on the ground.

When Mr de Maiziere passed on the response to Ms Merkel, she went back on her original commitment and refused to give final approval.

As a result, the key five words stipulating that police would push back migrants without a valid entry visa were removed from the order — and Germany’s borders stayed open for a further 180 days, during which time hundreds of thousands of migrants entered the country. …

The revelations in the book, Driven by Events: Merkel’s Refugee Policy, give the lie to claims that her Willkommenskultur — welcome policy — towards migrants was driven by humanitarian and ethical concerns, suggesting it was instead down to a lack of nerve.

“In the end, Merkel refused to assume responsibility even as everything was in place to close the borders, so they remained open — without an explicit decision,” Alexander added.

… “The selfies were not planned, the border opening was not planned,” said Alexander. “But then came a wave of incredible rapture in Germany — and she went with the public mood as ever. Merkel governs by the polls.” …

Alexander argues in the book that the move also helped fuel “anxiety about migration” across Europe that helped contribute to last June’s Brexit vote and supplied ammunition to Donald Trump, who severely criticised Merkel during his election campaign.

In other words, respectable conventional wisdom in the Current Year was lunatic.