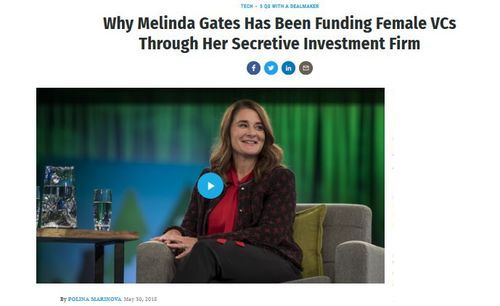 Melinda Gates: Only Women And Minorities Can Give Us Innovation

Melinda Gates, the leftist spouse wife of leftist Microsoft tycoon Bill Gates, actually thinks that unless we give women and minorities more investment capital, technological innovation is a near impossibility.

At least that’s what she told Fortune magazine:

I am a big believer in disruptive innovation, but it’s been incredibly disappointing to watch how few women-led businesses are getting funded. Ultimately, if we want more innovation and better products, we’ve got to put more money behind women and minorities. That wasn’t happening, so I decided to step in and see what I could do to help a little bit.

[Why Melinda Gates Has Been Funding Female VCs Through Her Secretive Investment Firm, by Polina Marinova, May 30, 2018.]

That might be the most idiotic remark from someone of her intelligence ever recorded given the sex and race of her husband, perhaps the most revolutionary innovator of the 20th century. Then there’s this guy of the same sex and color, and a third and a fourth. You can find a list of innovators here and Google their photographs. They don’t resemble Hank Johnson or Ta-Nehisi Coates, the “MacArthur Genius” who admitted he was something of a dope in school.

And let us not forget the women and minorities—and by “minorities,” she means blacks and maybe Hispanics, not Asians—who did not invent the American automobile, air conditioning, the telephone, the printing telegraph, the light bulb, movie camera and phonograph, the steamboat, the steam engine and its successor, the reaper, the cotton gin, penicillin, the polio vaccine, the smallpox vaccine and concept of vaccination and on and on, all the way back to the printing press and long before that, the sewer system and running water.

Somehow, Western Civilization progressed for 20 centuries without an investment program for women and minorities.

The point here isn’t to say women and minorities have contributed nothing, or that they can’t contribute anything. The point is to call BS on a demonstrably ridiculous claim by someone who should know better and does know better.

Gates is justifying her leftist activism with a claim she knows is false. That is unsurprising. Leftism is a lie.