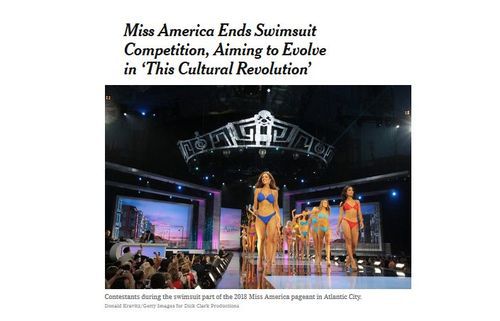 … Now under mostly female leadership, the Miss America Organization said Tuesday that it was scrapping the swimsuit competition, starting at the national contest in September, in a sweeping change that will also reshape local and state contests.

“I’ve talked to tons of young people who’ve said to me, ‘I’d love to be a part of that program, but I don’t want to parade around in a swimsuit,’” Gretchen Carlson, a former Fox News anchor who is now the organization’s chairwoman, said in an interview. “I get it.”

Ms. Carlson launched her fabulous career on TV by winning the Miss America contest in a swimsuit back in the 1980s.

That was fine back then, but Ms. Carlson is here to assure us that today’s young women definitely don’t want to get a leg up the career ladder by any such displays of youth and beauty. Today’s young women believe first and foremost in Solidarity with aging female celebrities and wouldn’t dream of displacing them the way today’s aging female celebrities displaced their predecessors. Turnabout is not fair play!

“We are not going to judge you on your outward appearance,” Ms. Carlson, who was Miss America in 1989, said on ABC’s “Good Morning America” on Tuesday. “We are moving it forward and evolving it in this cultural revolution.”

It’s of course instructive to recall a previous Cultural Revolution that had been spark-plugged by a former leading lady of the Shanghai stage, Chiang Ching, the fourth Mrs. Mao. As Paul Johnson noted in Modern Times:

She seems to have brought to the Chinese scene, already envenomed by the bitter sectarian factionalism inherent in Marxist-Leninist politics, the spirit of the theatrical vendetta.