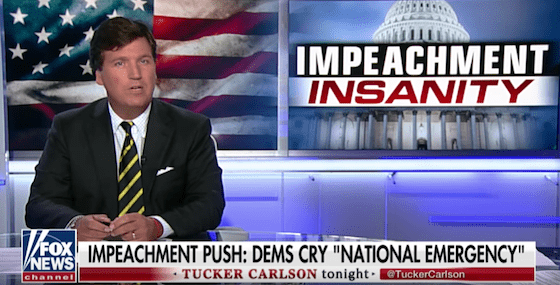 Media Try to Drum Up Support for Impeachment, Voters "Madder At The Media"

The leftist press is clearly thrilled to have the proposed removal of a president to report, even though it’s not a real impeachment since the House has not voted on it. As attorney Andrew McCarthy recently wrote, If the House Won’t Vote, Impeachment Inquiry Is Just a Democratic Stunt.

Speaker Pelosi is acting alone as the leader/instigator-in-chief in order to protect her members who were elected in Trump-supporting districts. So she marches around firing up the media to treat her impeachment-lite campaign as the real thing, and they are complying.

Speaking of the media, on Wednesday the Rasmussen pollsters reported that the press ranks #1 in the public’s anger these days, worse than politicians even:

Voters Are Madder at the Media Than at Trump or His Foes, Rasmussen Reports, October 02, 2019

Voters are mad at President Trump and his political opponents, but they’re angriest at the media these days.

A new Rasmussen Reports national telephone and online survey shows that 53% of Likely U.S. Voters are angry at the president, with 39% who are Very Angry. Forty-six percent (46%) are not angry at Trump, including 34% who are Not At All Angry. [. . .]

So the majority of voters know that the press is trying to manipulate them.

On Friday Tucker Carlson analyzed the media cheerleading about impeachment now happening, as well as what some members of the Democrat party are planning. 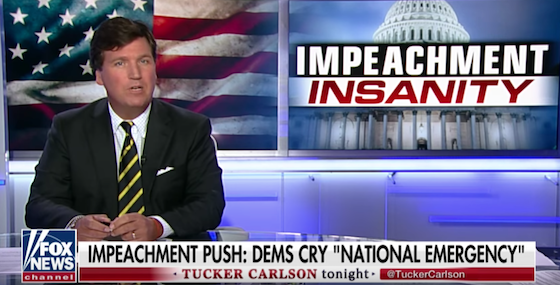 Pushing Pelosi to the far left is the Squad, a group of diverse freshmen women in the Congress who have appealed successfully to the press to magnify their effectiveness. As Tucker observed, Squad member Rep. Rashida Tlaib of Michiganistan wants President Trump’s cabinet locked up.

This is your new Democrat Party, ready to imprison political opponents who have been accused of no crimes at all.

TUCKER CARLSON: Well, good evening and welcome to “Tucker Carlson Tonight.” We’re nearing the end of our second full week of total saturation Ukraine coverage — that means every channel, every hour of the day.

So at this point, you’d think it would be obvious what exactly the fuss is about. After this much talking, you would assume every person in America would understand what crimes Donald Trump is being accused of committing.

But no, even now, the story still feels obscure and strangely light. There’s nothing mysterious or weighty about it. We already know all of the facts, there’s a transcript, and yet they still don’t seem very shocking.

And so maybe for that reason, our news anchors have been doing their very best to keep the blood pressure high. The game is boring, so the cheerleaders have to work overtime, twice as hard.

For example, here was MSNBC’s best attempt to get you to care:

MSNBC HOST CHUCK TODD: I don’t say this lightly. But let’s be frank, a national nightmare is upon us. The basic rules of our democracy are under attack from the President.

We begin tonight with a series of admissions by the President that all but assures his impeachment in the House of Representatives.

This moment should arguably be a national emergency. The Founding Fathers would have considered it a national emergency if the President publicly lobbied multiple foreign governments to interfere in the next election. It’s tough to say lightly. But this is the moment that we’re at.

CARLSON: Well, I think a good cliche bomb just went off. Try to ignore how hackneyed and badly written that speech was. The state of education in this country clearly is in rapid decline. Nobody can write a decent paragraph anymore. Someday we’re going to do a special on that.

In a democracy, the big decisions are made by voters in elections. They are not made by left-wing talk show host or by the Washington Post, or even by high level C.I.A. employees acting anonymously as whistleblowers. No.

In a democracy, the main decisions are made by citizens casting ballots — that, for example, is how you remove a President by beating him in an election. That’s always the way we did it here in America. Not any more.

So yes, our democracy is under attack. They are right about that. And yet for all of his faults, Donald Trump is not the attacker. But wait a second, they’re telling you, we understand how grave a decision impeachment is, in fact, we’re praying over it — people of faith that we are.

But in this case, impeachment is avoidable. Soliciting information from foreign countries is corrupt and evil. That’s what they’re telling you. Okay, fine. But let’s at least acknowledge that this standard is a brand new standard, I mean, brand new standard, like 20 minutes ago, because it wasn’t that long ago, less than a year, you’ll remember this — that all of American politics revolved around information solicited from foreign countries. It was called the Steele dossier. And back then, the press corps strongly approved of it.

UNIDENTIFIED MALE: The allegations in this Christopher Steele dossier, and you went through the timeline very well a few moments ago, are stunning.

UNIDENTIFIED FEMALE: They’re actually substantial portions of what was in the Steele dossier, which was a raw intelligence document that have indeed checked out.

CNN HOST JIM SCIUTTO: Based on our own reporting and word from numerous official sources, the dossier, in fact, is far from bogus.

CARLSON: Oh, the dossier. It was totally fine. In case you forgotten, and you may have forgotten because, because why would you remember? But Christopher Steele, who wrote the dossier was a foreign intelligence operative. He gathered his material abroad in foreign countries, some of it clearly from foreign government officials.

At the time, that was absolutely fine with Democrats. They weren’t embarrassed to say so. Clinton campaign staffer, Brian Fallon tweeted this. We can give you many examples. Here’s one, here’s his tweet. “I regret I didn’t know about Christopher Steele’s hiring pre-election. If I had, I would have volunteered to go to Europe and try to help him.”

Oh, okay. And by the way, if foreign interference is such a concern — and by the way, it should be a concern — then why are we more worried about foreign companies sending de facto bribes to the family members of connected politicians? There are a lot of those. We’re picking on Joe Biden’s son because it’s in the news, but it could be a lot of people’s sons, trust me, but in the case of Biden’s son, nobody thinks he’s an expert on Ukrainian energy policy. He got the gig because of his dad. It was influence peddling, obviously. In this case, that’s okay, though, for some reason.

So let’s just be totally honest. Let’s stop lying if we can, just for a second. I know it’s hard in modern America where everyone is required to lie all the time. But let’s just be honest, for this one moment.

In Washington right now, there are no actual rules. Partisans simply invent standards for the purpose of destroying their political enemies. Just today, Hillary Clinton tweeted this, from the late Democratic member of Congress, this quote. “If the impeachment provision in the Constitution of the United States will not reach the offenses charged here, then perhaps that 18th century Constitution should be abandoned to a 20th century paper shredder.” That’s Barbara Jordan, by the way.

In other words, if the process doesn’t reach the outcome that Hillary Clinton wants it to reach, she thinks we ought to scrap the Constitution. Oh. Probably not a question that that concept appeals to Michigan, Congresswoman Rashida Tlaib. This week, Tlaib told her constituents that the Democratic Party is now considering ways to arrest members of Trump’s cabinet. Jailing them in Detroit would be a good option, she explained, watch this.

So I just want you to know, I will relay your message. I will tell them they can hold off those people right here in Detroit, we will take care of them. And make sure they show up to the committee hearing. We won’t hurt them.

CARLSON: Yes. Just going to arrest them. That’s not Third World or anything. Arrest the cabinet. You’ve got to give Tlaib credit for honesty, anyway. She is not pretending to be prayerful, like Nancy Pelosi. She is just saying what she really thinks she speaks for, unfortunately, quite a few people in her party.

What we’re watching here, what you just watched in that clip is politics itself breaking down. That’s not politics, of course. That’s not the effort to persuade people, bring them over to your side through reason. No. That’s something different.

Modern partisans on the left don’t want to just win the next election. Electoral power is too transient. Voters might change their mind in the election after that. It happened by the way in 2016. Democrats don’t want to take that risk again.

That’s not a good way to run a country. But it’s an awfully effective way to maximize political power.