The anti-borders media has been in a tizzy over an illegal alien journalist, Jose Antonio Vargas, who recently outed himself with details on enabling editors in the New York Times Magazine (My Life as an Undocumented Immigrant). 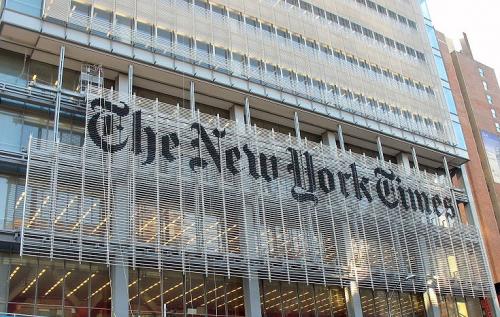 His NYT piece was the usual formulaic sob story of the American Dream thwarted by the mean government and its annoying laws. The various reactions have had the interesting aspect of media honchos tippy-toeing over the obvious ramifications regarding immigration law. Vargas’ big tear-jerker was refused by the Washington Post, which seemed fearful of being being prosecuted, as reported by Politico: Why did Post kill Jose Vargas story?

The article could be problematic for the Post, because it not only reveals that the paper broke the law by employing an illegal immigrant, but that Vargas told a mentor, Post assistant managing editor Peter Perl, about his immigration status. It is not clear whether Perl told anyone else at the paper.

Of course, scooting the article off to another newspaper won’t get the Post off the legal hook. Names were named, which was surely a strategy of Vargas to rope in the editors who hired him and force them to get on board like the good liberals they are. Vargas mentioned another newspaper that employed him, the San Francisco Chronicle, and Editor Phil Bronstein explained at length how he had been “duped” — probably as instructed by company lawyers.

Bronstein tried to play the aggrieved party in a rambling essay on his Chronicle blog, while still sounding sympathetic to his illegal alien scribbler. He worried about the “millions of people out there floating in terrifying limbo” but did not mention the citizens displaced by liars like Vargas in college slots and employment. The Chronicle is famously left-wing on border and immigration issues.

How many unemployed journalists, let go by newsroom downsizing over the past decade, are upset by this flouting of the law? Unlike most illegal alien articles created by the liberal press, this one affects the people who crank out the tiresome sob stories. But we are unlikely to hear any changes of heart about law and borders at least in public, since job-seeking reporters wouldn’t want to hurt their chances in one of the most liberal professions. Still, it would be interesting to hear some bar talk among journalists on this one.

Plus, someone should ask Bronstein whether he would support a new visa category for journalists to increase the diversity of the newsroom. How would that go over with reporters? It might make the media debate of immigration more interesting if practitioners had some skin in the game.

I was duped. I once hired an illegal immigrant to be a reporter for the Chronicle.

“I don’t think I’m a criminal,” Jose Antonio Vargas told me when we met last week, right before he announced his status to the world. “Don’t make me seem guiltier than I am.”

Jose lied to me and everyone else he worked for, and that’s not kosher, especially in a profession where facts and, more elusively, the truth are considered valuable commodities. In 2003 he wrote a story for us about illegals getting fake drivers’ licenses in the Mission when he’d used phony documents to get his own. He told me last week that he decided then that was a serious conflict of interest and wouldn’t cover immigration any more. But he later wrote on the topic for the Post.

Even though I didn’t know he was a lawbreaker when he worked for me, and he left the paper in 2004, his story lands me a little more directly in the atrociously rudderless but vicious debate on immigration reform.

After Jose’s essay was published on the New York Times website yesterday, detailing his deception in getting heady jobs here, at the Washington Post and the Huffington Post – and snagging exclusive access to Facebook’s Mark Zuckerberg for a New Yorker profile – I have to wonder:

Am I a dupe? A felon – at least according to a tough new Alabama law that might find me guilty of “harboring” Jose when he was in my office the other day (I also bought him coffee)? Or have I unwittingly supported a potentially powerful new movement in the push for immigration reform?

There’s no way to tell for sure when immigration laws themselves are a hopeless jumble of unenforced, unenforceable or just plain unaddressed issues covering 11 million people. The most visible are Latino day laborers, but the Vargas confession may also open those gnarly closet doors for high-achieving white collar professionals.

“This is going to come off as a vanity act, but it’s not,” Jose told me last Tuesday, just before he left San Francisco for New York on what might be his last allowable U.S. domestic flight with his doctored-up I.D. “I tell stories for a living and this is the one I’ve been afraid to tell. I’m one of many like me. There have got to be undocumented workers out there even more successful than I am.”

Jose’s narrative of arriving in the Bay Area at age 12, discovering his illegal status at 16 and driving himself thereafter to somehow earn citizenship with the help of friends and family, has created a cat-in-a-blender bloodstorm, particularly among his fellow journalists. The Times has gloated on its blogs about bagging the story while the Post, which rejected it, is a little dour.

General public pro- and anti- sentiment has been raucous.

“He’s taken a huge personal risk” one immigration lawyer said about Jose. He could get deported back to his native Philippines any time. But the evocatively-named ICE (Immigration and Customs Enforcement agency) is sensitive to bad publicity. So much for equal treatment. And Barack Obama’s most recent tepid and indecisive immigration speech in El Paso two weeks ago could help. Illegals “have to admit they broke the law,” the President said, “pay their taxes, pay a fine and learn English.”

So, except for the fine, I guess Jose has passed the Potus sniff test. The head of ICE himself, John Morton, issued a memo in June telling his agents to use “discretion” in going after illegals, considering factors including whether they had come here as children. Hello, Jose.

Then there’s Jose, the person. I’ve stayed in touch, been on panels with him and as recently as January recommended him for an important job at the Hearst newspaper division in New York. I feel silly for it, but not felonious.

Last month, he went to dinner at the home of a local big time businessman and philanthropist, seated among digital media gurus, and was being considered there for a job at a prestigious journalism institution back East.

During that period he was quietly and carefully lawyering up and basting his plans for coming out and starting a new organization – Define American – to get the DREAM (Development, Relief and Education for Alien Minors) Act passed and raise awareness that the illegal population is also upscale as much as it involves day laborers and house cleaners. Though most of the latter don’t have media handlers and legal teams.

While publicity and good lawyers may save his residency, the most likely road kill in the Jose conflagration could be Peter Perl, a Post training editor who knew the secret and kept it. The Post said ominously that what he did “was wrong.” It’s the knowing that sideswiped careers of people like Meg Whitman and failed federal job candidates Zoe Baird and Bernard Kerik.

Post executive editor Marcus Brauchli told me “what Jose did was wrong. It’s a compelling and interesting story” and Jose is a “talented and imaginative guy.” But Brauchli seems to feel duped.

No so much former Post managing editor – now managing editor at Frontline, Phil Bennett. “I’m torn,” Bennett said when I spoke with him a few days ago. “Honesty matters. But what Jose has done is courageous and I admire him for it.”Jose is a hustler, what one friend called “a classic self-promoter” who wisely identified those who could and would help him. He had to be to maintain the life he did. He refers to the “underground railroad” of secret allies and assistance, but his was like a posh lounge car, not a grape field.

He says he’s flabbergasted to be the story instead of reporting it. “The irony is that I had to come out to be unemployed,” he says, now that he won’t be able to get a legitimate job; his only financial support comes from his new organization’s backers. Coming out as gay in high school wasn’t “nearly as dangerous.” While close friends knew his sexual orientation, they didn’t know he was here illegally.

He’s now freed from the fear that cut into his pleasure over his many successes – a documentary screened at the Tribeca festival, the Zuckerberg get. But the future is, as they say on TV news, uncertain. He complains about his Times mug shot but revels a little in their proposed magazine headline: “OUTLAW.” He’s just barely 30.

For me, despite the subterfuge, he’s done what he intended: given a surprising, articulate and human face to an important issue for at least some of those millions of people out there floating in terrifying limbo. For me, it’s the face of a friend

Like many successful young people blessed with talent and brains, Jose has a healthy dose of hubris. He’ll have to watch that as much as he will the approaching footsteps of ICE enforcers.

But if he can come out, the force of his story – both good reaction and bad – and his project just might lubricate the politically tarred-up wheels of government and help craft sane immigration policy. If it has that effect, we should forgive him his lies.