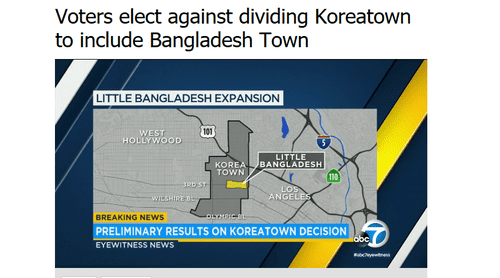 It first got a freeway offramp sign calling it “Koreatown” around 1979 or so. Bangladeshi immigrants now want the city to designate part of Koreatown as “Bangladeshtown.”

That won’t be a problem, right? Because without evil white males to gum up the harmony of the Coalition of the Fringes, amity and cooperation will no doubt prevail …

But from KABC in Los Angeles:

Voters elect against dividing Koreatown to include Bangladesh Town By ABC7.com staff

KOREATOWN, LOS ANGELES (KABC) — Preliminary results of the vote on whether Koreatown would be divided to include Bangladesh Town overwhelmingly favored the status quo Wednesday.

Among the 19,126 votes counted, 18,884 of them elected against the official recognition of a Bangladesh Town….

The Bangladeshi community is expanding in Los Angeles and they’ve wanted a designated area, like Koreatown, to express their identity.

Comedienne Ali Wong offers a useful distinction between what she calls Fancy Asians (Japanese, Korean, Chinese) and “Jungle Asians,” who are from Vietnam, Philippines, Laos, etc. (I don’t know where Bangladeshis would fit in for her, if at all. She probably doesn’t consider them Asian.)