Los Angeles’ Hispanic Mayor Antonio Villaraigosa had his moment in the glare of the national spotlight at the Democratic Convention, and did not get good marks. His handling of the changes to the party platform from the stage was arguably the worst, most cringeworthy moment of the convention, as the audience refused to co-operate and hooted against including God in the document. [Watch.]

The situation wasn’t of Villaraigosa’s own making — a photo of the teleprompter shows the results of a voice vote were a foregone conclusion — but an important skill in our present world of vacuous appearance-based politics is the ability to keep up appearances no matter what happens. He looked ineffectual and the party appeared embarrassingly undemocratic. 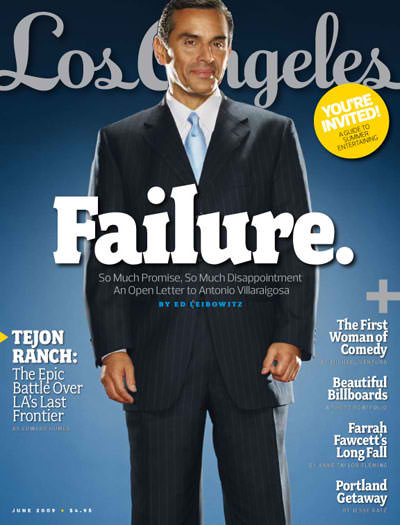 The appointment of the mayor as convention Chair was seen by many as a freebie from the White House to freshen up the prospects for a failing ethnic politician whose shine had faded considerably. But poor performance may chill his hopes to become Governor of California.

Or not. Ability to perform the basic functions of the job seems less a requirement in the one-party state, where non-white ethnicity is increasingly numero uno. Failure is no problema. If the liberal media loves a pol, they will cover up or avoid the bad behavior.

In his speech to the convention, Villaraigosa also ad libbed about his affirmative action doorway to success:

[. . .] Villaraigosa said his own story, as the grandson of a Mexican immigrant and son of a single mom, shows why encouraging diversity is important.

“I got there on an affirmative action program, and some would say I got in through the back door,” he said. “But one thing’s for sure: I got out through the front. That’s the open, inclusive America that we love.”

After graduating from UCLA (where he was a leader in the Mexican reconquista club MEChA), he attended the unaccredited People’s College of Law and failed to pass the bar exam after four attempts. So he turned to politics for a career, after working as a labor organizer.

The L.A. Weekly has been keeping tabs on the mayor’s sketchy behavior for years, and recently did a review on the occasion of his return from the DNC.

With the Democratic National Convention now over, it’s clear that President Barack Obama has chosen, of all people, Los Angeles Mayor Antonio Villaraigosa to be a high-profile cheerleader for his 2012 re-election campaign.

That decision has caused a lot of head scratching in Los Angeles. He was, after all, deemed a “failure” by Los Angeles magazine and the “All-About-Me Mayor” by L.A. Weekly.

Since American voters will be seeing a lot of Villaraigosa in the coming months, and he’ll undoubtedly push for a high-level White House job if Obama is re-elected, here are some important things they should know about our mayor…

In 2008, L.A. Weekly published the feature story “The All-About-Me Mayor,” in which we found that due to numerous trips out of town, self-promotion events, and other time wasters, Villaraigosa had over a ten-week period only spent 11 percent of his time on the nuts-and-bolts work of running the nation’s second largest city.

“No mayor has been out of town like Antonio, not in my time in Los Angeles,” former Daily News editor Ron Kaye told L.A. Weekly. “And part of his game is to be buried in nonsense. … He needs to get to work!”

In the 2009 L.A. Weekly cover story “Envirowimps: L.A.’s Big Green Groups Get Comfy,” Los Angeles-area environmentalists grumbled that when it came to environmental issues Villaraigosa had a “lack of vision” and was “slow [to] action.”

In 2010, L.A. Weekly ran the story “Villaraigosa’s Five-Year Free Ticket Spree,” in which we found that the mayor had controversially accepted free tickets for 80 events worth between $50,000 and $100,000.

“Villaraigosa has very quietly accepted — and even angled for — free tickets to as many as 80 pricey events,” managing editor Jill Stewart and reporter Tibby Rothman wrote, “then failed to report all but one of them, as well as failed to keep records of his actions or the sources of this largesse.”

By the way, folks in L.A.’s Latino community aren’t too pleased with Villaraigosa. In September 2009, an East Hollywood mural of Villaraigosa was splashed with red paint and tagged with the word “vendido,” which translated from Spanish essentially means someone who has sold out his people.

In the 2011 L.A. Weekly feature story “City of Airheads,” we found that Villaraigosa-approved budget slashing had decimated Los Angeles’ once-proud public library system — and that no other major city except for Detroit had shuttered its libraries two days a week.

“L.A. is known as a city of airheads,” Sara Ring, an L.A. writer and mother, told us. “Then we go and cut the library budget. It doesn’t send a great message to the rest of the country.”

“I just keep thinking about those kids,” she said. “The library was a neutral territory where the gangs didn’t really come in. It makes me worry about them. It could be a very bad situation.”

In 2011, the L.A. Weekly story “Los Angeles: Broke and Broken” noted that while Villaraigosa was cutting the library budget and other city services, he maintained the largest mayoral staff in the city’s history at an annual cost of $42 million.

There’s more we could share with American voters, but we’ll leave it there for now.