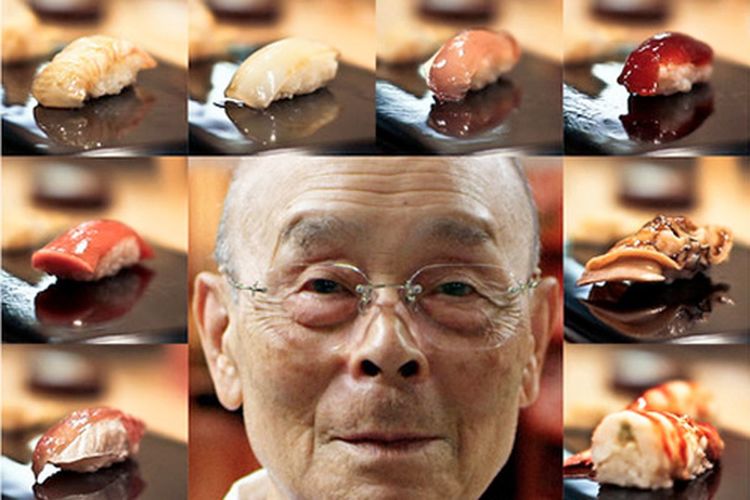 "Jiro Dreams of Sushi" And The Japanese Economy

This is a documentary from last year about an 85-year-old sushi chef whose ten-seat restaurant in a Tokyo subway station has Michelin's top rating of three stars. (Here's Tyler Cowen's review of the economics of this $300 per dinner sushi bar.) Most of the movie consists of people telling you that Jiro's sushi is the best and about how hard Jiro works. The subtitles are in tiny white type and all six guys who work in the restaurant are wearing white sushi chef smocks, so it's pretty illegible.

You don't actually learn much from the documentary about why Jiro's sushi is so good, perhaps because Jiro is a crafty old bastard who isn't giving any tips away to American documentarians for free. The only lesson I can remember is Jiro explaining that when he started in the sushi business 75 years ago, they only massaged the octopus for 30 minutes, but now at his place they always massage the octopus for 40 to 50 minutes. So, all you aspiring sushi chefs out there, listen up: Massage your octopus longer.

The documentary is really upbeat, but it's probably more memorable when viewed as a nightmarish comedy about Jiro's 50-year-old son, who has been working for his father for the last 31 years, with no end in sight.

There are various interviews with the wholesalers of fish and rice, who all deal only in tiny quantities of expensive, high quality, and they've all been selling to Jiro for decades, and they only sell their best stuff to Jiro because only he can do justice to their perfect rice. It's all very cozy. It reminded me of articles I used to read decades ago in the business press explaining why American companies could never get a toehold in the Japanese market, despite extremely polite assurances from the Japanese government that all impediments to American firms would be swept away posthaste.

By the way, according to Wikipedia, Japan has more Michelin three starred restaurants (32) than any other country, even France (26). America is 3rd with 10, then Germany with 9. Kyoto has as many three-starred restaurants (7) as New York City, while Chicago has one and L.A. zero.

Now, it's possible that Michelin is tossing out stars in Japan to pump up its brand in that market. Or, there is this theory that whenever you read about how the Japanese economy has been so horrible for the last 22 years, which is all the time, that's what the Japanese want you to believe. Back in the 1980s, everybody believed that the Japanese were going to buy up the whole world, so they gave the Japanese a lot of grief, such as putting quotas on car imports, forcing them to open plants in America. But then their bubble burst in 1990, and now you never hear about the Japanese anymore, except about how tragic their economy is and they can only afford $300 sushi dinners.