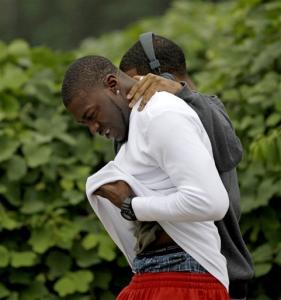 The dead: Ed Christian, Ladarious Phillips, and Damario Pitts, all 20.

Keep in mind the following:

1. This was an Auburn University shooting—two out of three of the dead were former Auburn football players Ed Christian and Ladarious Phillips, and the apartments were in the University Heights section. However, because the shooting did not occur on campus, none of the dead or wounded will appear in the university’s “Clery Act” statistics, just as Eve Carson does not appear in said stats. [As many as seven shot in incident in Auburn that killed two former football players by Charles Goldberg, AL.com, Sunday, June 10, 2012, 11:51 a.m.; updated: 12:06 p.m.]; and

2. This was a black thing. The alleged shooter was black, as were most, if not all of the people shot. Circa 1990, an article I read on the Prop. 48 debate quoted an NCAA official as saying that the organization saw providing athletic scholarships to black athletes as a part of affirmative action.

Turquorius Vines, 23, said he was at the pool party Saturday evening at the University Heights apartments with one of his friends. He said he and his friend were approached by two other men who started arguing with them over a woman.

Vines said he punched one of the men, while his friend hit both of the men over the head with a bottle. Either one or both of the two men then started shooting, he said. He said his friend was shot and killed, while two others also were hit by gunfire. Vines said he had never before seen the men who he had been arguing with.

"It's like I lost a lung," Vines said of his friend. "I don't know how I'm going to survive this."

It’s perfectly “normal” for a couple of black men (S2) to walk up to two black strangers (S1) at a party, for S2 to start arguing with S1 about a woman, for one of S1 to smash a bottle—i.e., a deadly weapon—over S2’s heads, and for S2 to then start shooting everyone in sight.

Meanwhile, we’ll hear the usual litany about “senseless violence.” It’s not senseless at all, Stupid, but not senseless. And if it’s “senseless,” how come whites aren’t allowed to criticize it?

“Senseless” really means, “You’re not permitted to use reason to break the incident down into its elements, and criticize how it developed.”

It is the robotic reaction to these black crimes that is senseless.

If thugs who are intellectually and morally unfit for academic life had never been admitted to Auburn, this mass shooting would never have happened.

If black women did not name their manchildren “Turquorius,” “S—tavious,” et al., and raise them to act accordingly, they wouldn’t be murderous thugs, in the first place.

But saying that makes me a “racist,” which is, of course, worse than being a black mass murderer.