Imagine if in 1960 (at the height of the Cold War) the USSR had proposed to build a massive “cultural center” somewhere in America where commies could hang out and conspire. It never would have happened.

But when the project represents Islam, the true nature of being a totalitarian ideology bent on world domination is disguised by the protected category of religion. Therefore, an enemy installation called a mosque generally gets little opposition.

Below, an illustration of the $100 million mega-mosque and associated Islamist structures, to be built in Maryland. 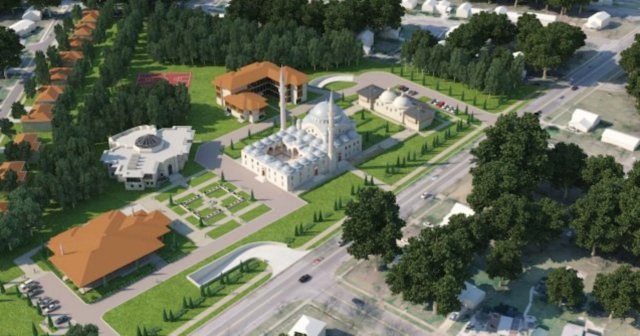 Mosques of this size are political and military edifices that have little to do with individual worship of Allah. As Muslims say (from a 1912 poem, the Solder’s Prayer, written by a Turkish nationalist):

The mosques are our barracks,
The domes our helmets,
The minarets our bayonets,
And the faithful our soldiers.

The Maryland mega-mosque is meant to be a territorial marker, showing Islam’s increasing power over America, just like the proposed Ground Zero Mosque in Manhattan.

Every Muslim immigrant is a potential warrior for jihad, like the Tsarnaev Boston bombers, who appeared assimilated, but only superficially. America should learn from the European disaster and stop diverse Muslim immigration before it’s too late.

The building of this center takes Turkey’s “outreach” in America out of the realm of the subtle.

The government of Turkey is building a 15-acre, $100 million mega-mosque in Lanham, Maryland. Turkey’s Prime Minister Erdogan visited the site on May 15 as part of his official visit to the U.S.. The state of Maryland was officially represented at the event by its Secretary of State John McDonough.

The event was also attended by the leaders of two U.S. Muslim Brotherhood entities.

The mega-mosque is called the Turkish American Culture and Civilization Center and, according to the Muslim Link, it “will likely become the largest and most striking examples of Islamic architecture in the western hemisphere” when it is finished in 2014. The Muslim Link explicitly says it is “a project of the government of Turkey.”

On May 15, Prime Minister Erdogan spoke to hundreds of people at the construction site and said he’d come back for the opening ceremony next year. He warned the audience that there are groups promoting “Islamophobia,” branding potential critics as paranoid bigots. Erdogan recently said that “Islamophobia” and Zionism are equivalent to fascism and anti-Semitism, saying they are a “crime against humanity.”

On this trip to the U.S., Erdogan brought the father of one of the Islamists killed while on a Turkish flotilla which was trying to break Israel’s weapons blockade on Gaza. Gaza is controlled by Hamas, which is a designated terrorist organization by the U.S. State Department. Erdogan reportedly wanted to him to meet President Obama. (In the end, the father met with Secretary of State John Kerry.)

The leaders of two U.S. Muslim Brotherhood entities in attendance included Naeem Baig, is the president of the Islamic Circle of North America (ICNA). A 1991 U.S. Muslim Brotherhood memolists ICNA as one of “our organizations and the organizations of our friends.” The memo says its “work in America is “a kind of grand jihad in eliminating and destroying the Western civilization from within.” The memo even refers to meetings with ICNA where there was talk about a merger.

ICNA is also linked to the Pakistani Islamist group Jamaat-e-Islami and its conferences feature radical speakers. A former ICNA president was recently indicted for horrific war crimes committed during Bangladesh’s 1971 succession from Pakistan – the torture and murder or 18 political opponents.

The Turkish government has been quietly spreading its influence in the U.S., but Erdogan’s public invovlement in the building of this center takes Turkey’s “outreach” in America out of the realm of the subtle.

The Clarion Project recently reported on the growing ties between the Turkish government and Native American tribes. With Congress’ help, thousands of Turkish contractors and their families may be flooding into America’s heartland and settling in semi-autonomous zones of the Native Americans, well out of the reach of American authorities.

Erdogan and his Islamist government calls Hamas a “resistance” group, despite the fact that Hamas specifically targets Israeli civilians with suicide bombings and rocket attacks. Not surprisingly, Hamas leader Khaled Mashaal is a big admirer of Erdogan.

Since taking office in 2003, Erdogan has been implementing his Islamist agenda, slowly but steadily changing Turkey from a secular democracy to an Islamist state: College admissions have been changed to favor religious students, the military has been gutted of its secular generals (with one in five generals currently in prison on dubious charges) and women have been routed out of top government jobs. Honor killings in Turkey increased 1,400 percent between 2002 and 2009. Persecution of artists and journalists has become commonplace as opponents are charged with “crimes” like “denigrating Islam” and “denigrading the state.”

According to the Muslim Link, the new center will have five buildings, including a mosque “constructed using sixteenth century Ottoman architecture that can hold 750 worshipers.”

The Turkish American Culture and Civilization Center will be the largest Islamic site in the Western Hemisphere. The fact that it is being built by the government of Turkey represents the next step in Erdogan’s desire to increase the Islamist influence in America.